[Note: Download here for the white paper, Intuition Definition and Description. Below is the web version.]

With intuition, it’s important to note that it has no universally accepted definition spanning across all disciplines. OZA’s definition is not designed to serve academic, scientific or theoretical discussions or experimentation. It serves to train the practical application of intuition in a manner easily identifiable to people so they can appreciate its influence and integrate it effectively into their daily activities. With that said, the intuition definition is:

The acquiring of knowledge and the making of decisions through emotions.

A scene from Star Trek – The Next Generation gives an excellent introduction to this intuition definition. Let’s look at that now before we delve into the implications of this definition, the nature of intuition and the connection it has with cognition.

In the scene the Chief Engineer, Gordi LaForge, and the Second Commander, Data, a very sophisticated android, are discussing whether to believe a Romulan official’s claims that his people will be taking a provocative action that could start a war. LaForge, Data and the rest of the Enterprise’s crew aren’t sure whether to treat the Romulan official as an ally or a spy. Here is the scene:

La Forge: I don’t know, Data. My gut tells me we ought to be listening to what this guy’s trying to tell us.
Data: Your gut?
La Forge: It’s just a . . . a feeling, you know, an instinct, intuition.
Data: But these qualities would interfere with rational judgment. Would they not?
La Forge: You’re right, sometimes they do.
Data: Then why not rely strictly on the facts?
La Forge: Because you just can’t rely on the plain and simple facts. Sometimes they lie.
Data: They can lead to the wrong conclusions but they cannot lie.
La Forge: Yeah, what do you think? Is he a defector or not?
Data: The facts to date would lead to the objective conclusion that he is not.
La Forge: Well . . . somehow I think we’re going to catch the Romulans with their pants down on Nelvana III, just like he says.
Data: With their pants . . . ?
La Forge: A metaphor. Catching them in the act.
Data: Because your gut tells you so?
La Forge: Exactly. But you can’t always go with your gut, either. It’s . . . Well, it’s a combination, Data. All right, I’ll put it to you this way. All these feelings that get in the way of human judgment, that confuse the hell out of us that make us second guess ourselves – well, we need them. We need them to . . . help us fill in the missing pieces because we almost never have all the facts.
Data: So a person fills in the missing pieces of the puzzle with his own personality, resulting in a conclusion based as much on instinct and intuition as on fact.
La Forge: Now you’re getting it.
Data: Hmm . . . But what does one do if he has no instinct or intuition?

With this background let’s delve into the definition’s implications, intuition’s nature and the connection to cognition.

Implication of Emotions’ Connection to Intuition

Expressed positively, the major implication of this intuition definition is that our emotions have a great capacity to give us insights. It’s a matter of appreciating how they come into play and of setting the right expectations for what they have to say. As for Omega Z Advsiors’ work, our focus is on intuition’s influencing and problem-solving aspects.

For many, the definition raises questions about their preconceived ideas of emotions. Outside of giving us an indicator of how we are feeling about our state of being, we often don’t consider them as sources of knowledge. In our everyday lives, we frequently discount, ignore, disbelieve, suppress and deny our feelings in favor of pure rationality. Consequently, since emotions heavily weigh into all human decisions and actions no matter how much we think we are filtering them, if we do not account for them, then we increase the likelihood of error.

As the definition implies, intuition is a process involving acquiring and making. Therefore, as is true with any process, it’s important to understand the nature of its output. For if we expect intuition to produce the same kind of output we’ve come to learn and expect from cognition, we will overlook its value.

Intuition’s nature is imprecise and comprehensive. The best metaphor for explaining this nature is a picture: even though its more comprehensive than a set of words (“a picture is worth a thousand words”) the exact message is often imprecise when compared to the precision of actual sentences. Moreover, the words used to describe a picture could vary by person.

This nature is why intuition can expand your influence and your problem solving. Its net is very large. While some are deterred by its imprecision, precision is not always necessary. Sometimes you only need to know you’re in California; knowing whether you’re in some city of California is irrelevant.

How does this translate to our real-life, daily activity? Well, it does so in three ways: intuition provides direction, can operate unconsciously and shows itself in all our words and actions.

First, we need to realize that our emotions may not be precise in what they tell us, but they will say a lot about how we feel about things. While these feelings may not be able to give us the specifics we like in a well reasoned thought, they can guide us in the right direction if we let them.

Second, emotions are imprecise so that means how they consciously affect us is also imprecise. Some are extremely salient, others subliminal. Therefore, an important aspect of intuition’s nature is that it can function unconsciously – without our awareness. The degree to which we are conscious of these emotions has no bearing on their intuitive influence. As a result, intuition, the processing of emotions, will operate at all times whether we think it is or not.

Third, intuition manifests itself in all our words and actions. Since intuition is imprecise, frequently operates unconsciously and at all times, these are the ways we can observe its work. Intuition plays a role in every decision we make whether we believe it or not. This even includes such routine decisions as the things we buy, the clothes we wear, the movies we see, the games we play and the books we read.

We can characterize these three aspects of intuition’s nature as: direction, subliminity and omnipresence. However, their true value in our decision-making process will become more evident when we talk about intuition’s connection to cognition.

We can look at intuition’s connection to cognition from two perspectives: outcome and process. In terms of outcome, intuition fills the gaps created by cognition. In terms of the decision-making process, intuition occurs before cognition. When one form excessively dominates the other, a disconnect occurs. 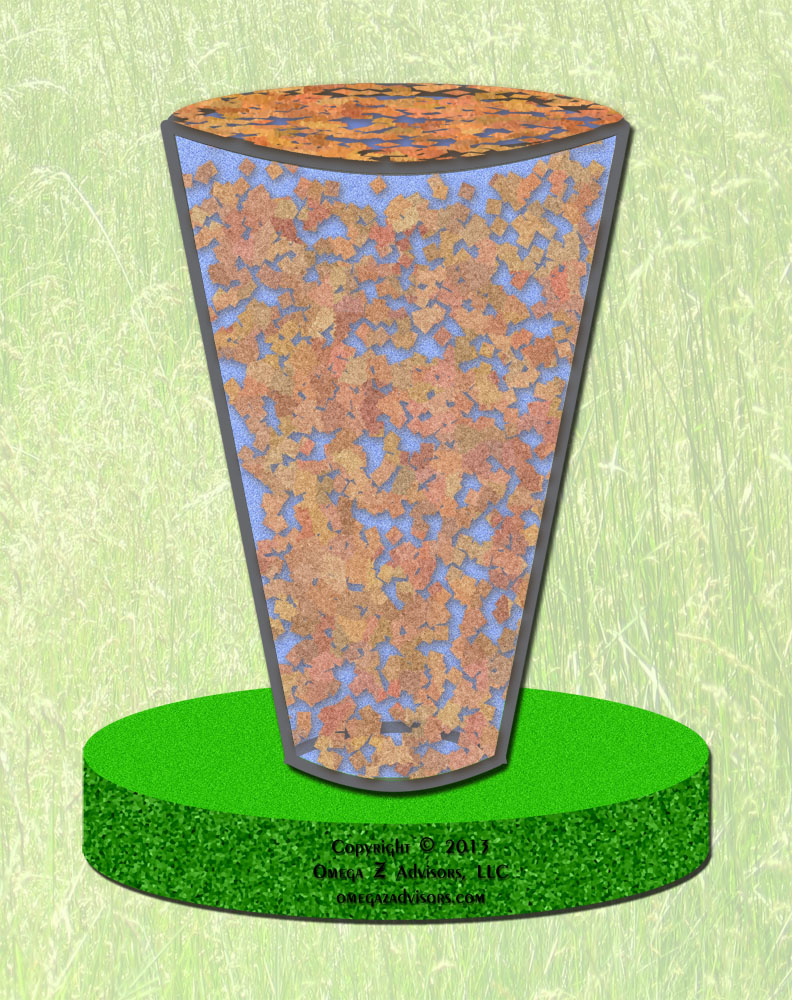 A glass filled with sand and water is a very effective analogy for applying the intuition definition to acquiring knowledge and making decisions.

As far as intuition filling in the gaps created by cognition, the above scene from Star Trek – The Next Generation has already touched on this latter point. A great symbolic illustration of this connection in decision making is a glass filled with sand.

To fill these spaces, we pour water into the glass until the sand and water begin to overflow. Water represents our intuition. I did this as a science exercise for some neighborhood children and found I could add about four and a half ounces of water to a twelve-ounce glass filled with fine, premium playground sand. In this illustration, the sand represents cognition and the water intuition. 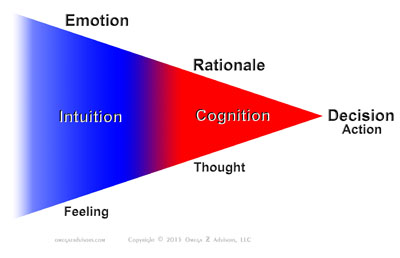 Intuition interprets our feelings and emotions and pushes them upward to form conscious thoughts from which our cognition turns into the decisions we make and the actions we take.

In terms of process, radar is an excellent illustrator of the connection between intuition and cognition. Let the appearance of something on radar represent intuition and the actual sighting of it be cognition.

The key implication of this metaphor is that intuition comes before cognition in our entire decision-making process. The movement of something from radar to an actual sighting represents the movement of a feeling to a thought to finally an action. Crystallization is another good illustrator: liquid (intuition) transformed into solid (cognition). Cognition crystallizes intuition’s output. Together intuition and cognition generate a concrete action in reality.

In daily practice, we will tend to observe intuitive dominance as ideas having difficulty being expressed in words or concrete actions – things aren’t getting done. Cognitive dominance will tend to appear as shallow reasoning that breaks down or entangles itself under questioning especially on the details – processes, such as planning, become important for their own sake. Whereas, intuition will tend to rely too much on people doing what’s best, cognition will tend to rely too much on policies, rules and processes to guide behavior.

In appreciating the connection between intuition and cognition it’s important to view it within the context of reality. In the final analysis, reality usually forces us to do something if we don’t take independent action. Therefore, at some point we need to put our wants and desires into concrete actions. Cognition plays that critical role.

Here, a house and home serve as an allegory for the integrative connection between cognition and intuition. Whereas, it’s hard to live in a home without a house, it’s quite easy to live in a house without it being a home. However, any house improves when it becomes a home. Intuitive dominance will make the acquisition of a house difficult, but cognitive dominance will make the turning of a house into a home almost impossible. In symbolic terms, that is the integrative nature of intuition’s connection to cognition.