An inherent conflict exists between talent and large organizations. They box it in. I first came across this in the landmark book by T.E. Lawrence (aka Lawrence of Arabia) Seven Pillars of Wisdom. He tapped this conflict to launch the Arab revolt in World War I against the Turks. 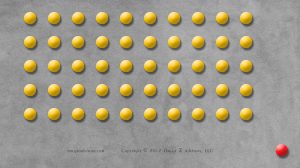 We can see quite clearly the inherent conflict between talent and large organizations by contrasting Special Forces with regular armies.

Why Large Organizations Box In Talent

In his book, Lawrence ponders why two Arabs can hold off a dozen Turks but a thousand Arabs can’t defeat a thousand Turks. He concludes that something happens when talent and large organizations merge. Talent loses something.

That loss occurs because large armies must organize around the weakest link. In this way, they can tap the advantages size and technology offer. In other words, large armies can’t organize around a set of duties and skills that are impossible for a soldier to perform. In short, literally and figuratively, they box in talent.

The contrast between today’s Special Forces and regular army supports this too. As the article, “Imperial Grunts,” shows in the October 2005 issue of The Atlantic, many of these SF fighters would not fit well in the regular army.

Talent and Large Organizations in the Workplace

In the workplace, companies set policies, rules, guidelines and protocols at some minimum level. They can’t have ones that set the bar too high. They won’t find enough employees. Witness why large organizations spread out their operations. It’s to access talent. One city can’t provide enough to meet that minimum level.

Thus, like an army, large organizations organize around the weakest link. Thus, a talent won’t have the freedom to show what he really could do. He must do his job. In a large firm that is usually very specific. It’s too narrow to make use of all his talents. It boxes him in.

Combining this with co-workers who threatened by the talent, boxing in worsens. They marginalize, even attack, the talent, saying he’s not a team player. In the end, the talent leaves. In this way, this inherent conflict resolves itself. The talent gets in line or finds himself spit out like ill tasting food.