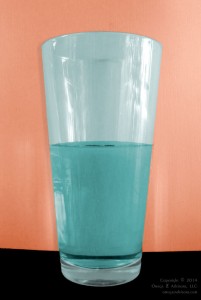 Is the glass half full or half empty?

People use the glass half full or half empty metaphor in many ways. I use it much in problem solving workshops.

For the most part we see this metaphor to convey the merits of a positive attitude. If it’s positive, one will see the glass as half full. If negative, half empty. In short, the message is that positivity beats negativity.

In problem solving and innovation though, seeing things from another view plays a key role. For instance, how can seeing the glass as half empty be a plus?

Another View Of Glass Half Full or Half Empty

So, to begin let’s run with the thought that positivity is good. Taking an idea to extreme helps in problem solving. It brings out its downside. It also helps one to begin to see the event from another view. To the point, how could positivity be bad?

As for the second force, people fear losing something close to three times more than they enjoy gaining it. For example, people will work harder not to lose a bonus than to earn one. Investing sees this all the time. Investors are more likely to hold onto a bad stock than a good one. Selling a bad stock admits a loss. Selling a good one brings a gain.

Fear Of Loss Is Much Greater Than The Joy Of Gain

Therefore, when it comes to the glass half full or half empty, those who see the latter will feel a greater sense of loss. Those who see it as half full are more likely to think there is nothing to worry about.They still have a lot of water.

I witnessed a real life example of this when I took a new sales manager to meet his people. In one office the sales rep was out. The manager saw and pointed to a picture of the rep’s four children and wife. He said, “I love to see that. It means he’ll be real hungry to sell and support his family.”

It’s also why crises motivate change in people far more than good times do. It’s why a water sales rep would rather have a glass-half-empty client than a glass-half-full one.

So, the question becomes, “Is the glass in need of water or is it all right?”