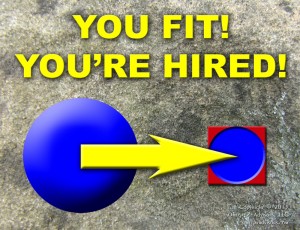 As algorithms, technology and sensors advance, we are discovering that hiring for fit rather than for talent runs further, deeper and more definable than we ever suspected. In fact, some people such as Don Peck in his article, “They’re Watching You at Work” (The Atlantic, December 2013 edition) are beginning to call current hiring practices as “dysfunctional.”

Among the researchers Peck cites is Lauren Rivera from Northwestern University’s Kellogg School of Management in which she states in her abstract from Hiring as Cultural Matching: The Case of Elite Professional Service Firms:

Employers sought candidates who were not only competent but also culturally similar to themselves in terms of leisure pursuits, experiences, and self-presentation styles. Concerns about shared culture were highly salient to employers and often outweighed concerns about productivity alone.

In 2009, a colleague showed me the interviewing guide from a Fortune 500 company. It began with, “It’s important that we look for people able to work in our culture.”* After researching this, I began coaching candidates and networking groups that the interview’s objective is to demonstrate fit more than to showcase talent (speaking notes). That means assessing interviewers quickly and positioning themselves within the context of interviewers’ personalities and experiences.

How dominant is cultural fit in your world?

*Note: I have altered the specific wording for confidentiality reasons, but its spirit and location in the document remain true.