One morning I joined a sales person on her sales calls. At lunch, she asked what I thought. I told her. She paused and then said, “Okay, you’ve told me all the good stuff. Now tell me the bad.” We’ve all undergone brainwashing: in order to improve we focus on correcting weaknesses while neglecting strengths to overcome them.

Long ago, I pruned the lead branch on a small tree reaching for the sky. Over the years, a branch sprouted below my cut and sharply turned upward, again heading for the sky. Rather than cut it again, I watched to see what would happen to the stub I had left. As that new branch grew thicker and reached ever closer to the sky, it engulfed the stub. Eventually, it faded completely as the new branch swallowed it. Wanting to grow upward, it didn’t do so from the cut where it was weak but rather from where it was strong.

The Germans’ blitzkrieg strategy in World War II, focused on attacking from where they were strong, not weak. While concentrating their forces to overwhelm at the point of attack, they left other areas exposed. They could not succeed by eliminating every weakness. They bypassed enemy strengths, engulfed them and choked supply lines causing resistance to fade. 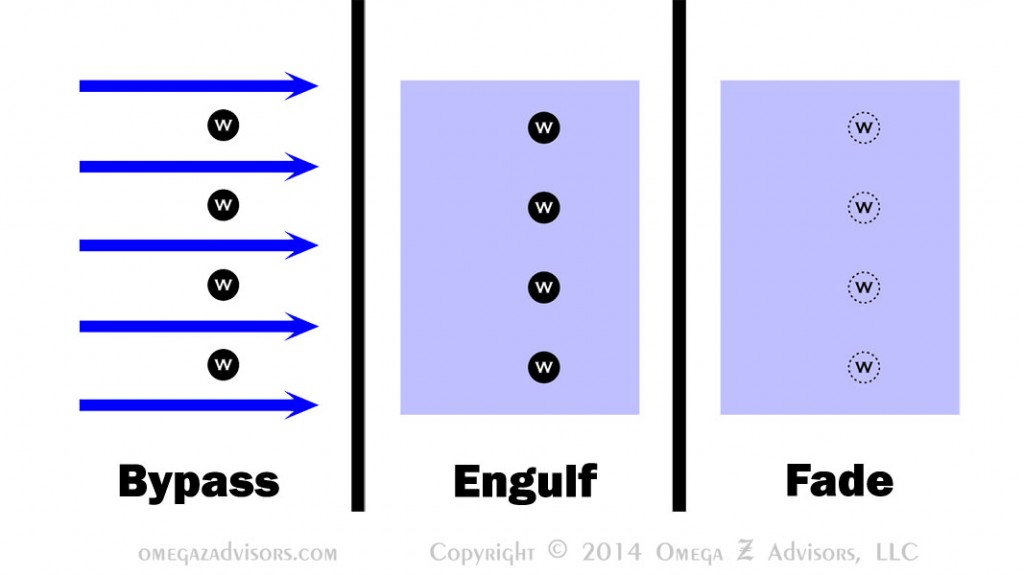 Traditional developmental methods of focusing to correct weaknesses is unnatural and is not what nature intended (Figure #1). Any idiot can identify our weaknesses; it takes wisdom to see how our strengths can engulf them so they fade as problems (Figure #2). If we’re not a dynamic speaker but know our subject, focus on delivering exceptional content and examples rather than entertainment and humor.

Thus, the question is not, “How do I correct the weakness?” but rather, “How do I use my strengths to overcome them?”

A resource that might help identify strengths: StrengthsFinders 2.0 by Tom Rath.