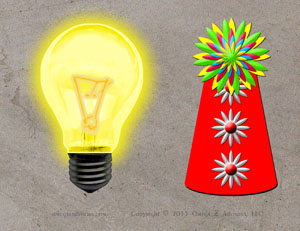 Genius or clown? The Donald Trump phenomenon turns over the rock upon which many leadership models are built. What do we find?

For example, most models present leadership as something almost divine. Leaders are altruistic and authentic. Their character is pristine, trustworthy. They unify all. They are things that . . . only gods are.

What about leaders we do not like? What do these models say then? They like to say, “That’s not leadership!” or “That’s bad leadership!” Do not let them off that easy.

The Donald Trump Phenomenon turns over the rock upon which all these models are built. Bugs scamper for the shadows. What are they? Let us name them.

Trump has confidence. We love confident people. They give us certainty in life. We do not like arrogant ones though. If we have good vibes, he is confident. If not, he is arrogant.

The bug is that there is power in sheer confidence, pure unapologetic confidence. Trump’s form is extreme. It dwarfs other factors. We get to see confidence naked. We see its raw power to convince when nothing else might be there.

2. Authenticity is about Perception

Authenticity is a bug too. Fans like to say, “I like authentic people.” When they run into people they do not like though, they often claim they are not authentic.

This is subjective too. Many like Donald Trump for his authenticity. Many do not like him because he is not.

This sheds light on an ugly truth about authenticity. It is not about whether we are or are not. It is about whether others perceive us so. It is telling our story in a good light. It is selling ourselves.

What will be the outcome of the Donald Trump Phenomenon? Who knows? One thing is positive though. It will be victory for Trump.

How do we know? He will tell us. It does not matter if it is. We like leaders who refuse defeat. They do not stop fighting. They do not surrender. They see things in a positive light even if it is dark out, very dark.

The biggest bug under this rock touches all the rest. Leadership is subjective. Many like Trump’s brand of leadership. Many do not.

A leader could be a genius to one and a clown to the next. Even gods have a hard time getting all people to see them the same way.

This colors how we see leaders. If we have good vibes, they are all things good. If we do not, they are not.

What is the overall lesson from this overturned rock? The seduction is powerful. It stops us from asking what leaders are being authentic, confident and positive about. We just like these things. Ask anyone.

The Donald Trump phenomenon reminds us that these things are subjective. We each decide what leadership is. It is personal. No expert can tell us. If we do not like it, we just say it is not leadership. Experts do.