In simple terms, this is a meshing of statistics and observations. Of the two types of surveys to assess corporate culture, self-reporting is more statistical, projective more observational. As with weather, only going with one leaves things out.

To see how the two types can mesh into a single corporate culture survey process, it helps to detail how each works. They are quite different. Yet, they are very complementary.

Self-reporting surveys have many ways to crunch the data they get from employees. They are often the blend of two forms though:

Examples include employee surveys, internal network analyses and cultural assessment questionnaires. In short, they are similar to personality tests. They are for cultures though.

This is similar to what many firms and consultants do in mergers. The focus there though is more on finances, processes, products, services and structure than just on culture.

The two types of surveys are as different as night and day. That allows them to run independently of one another. This builds in a second opinion to the corporate culture survey process. 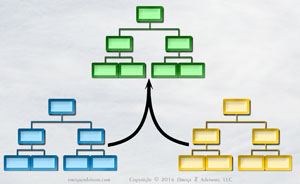 A great corporate culture survey process meshes the perspectives of the two main types of surveys.

Whether its medicine or financing, second opinions are frequent. Yet, in assessing corporate cultures, they are not.

Meshing self-reporting and projective surveys into one corporate culture survey process builds in a second opinion though. That is because their divergent approaches offer two perspectives of the same culture.

Getting the Benefits of Both

This corporate culture survey process taps the benefits of both types of surveys. It integrates the statistics with the observations. It integrates how employees perceive the culture with its aspects they cannot see.

In the final analysis, assessing cultures, as with personalities, is subjective. The choice of process heavily influences the output. Having a process that taps two very different ways of assessing broadens the lens through which we assess culture.

Just as night and day play key roles in the life cycle, together these two types of surveys can play a key role in a culture’s life.