To solve problems well, we often hear about challenging assumptions. Too often though training on this involves nothing more than playful games and puzzles. They just don’t cut it though. People need regular practice with real problems. As an example, let’s look at the all things equal assumption.

Example of All Things Equal Assumption

The all things equal assumption often appears in comparisons of two or more things. It leads people to think that anything not mentioned in the comparison is equal. For instance consider this question: Which pie has more cherries in it, one completely filled with cherries or one half filled?

This example also shows the importance of assumptions. They make communication and thought easier. We don’t have to consider all facts, just key ones. Quick, easy communication helps business. That makes assumptions hard to avoid at work.

Let’s move beyond this brain teaser though to tackle a real-life case I experienced. In this an investment firm had a consulting firm do a customer survey. They scored the highest mark ever recorded by the consultant for any of its clients.

Yet, the firm had lost more clients than it had gained for the last ten years. Asset-based pricing, fee increases and a super-charged stock market grew revenues and covered the problem.

When these favorable trends lapsed, they exposed the problem. How could a firm so good at customer service lose such business? Spotting the all things equal assumption gives an answer.

It’s here. The survey led us to think all customers are equal. They aren’t. Unhappy clients left. Happy ones stayed. After ten years, few unhappy clients remained to give poor ratings.

It’s like of a gallon of water mixed with a cup of sugar. It’s not very sweet. Boil off all but a cup of water though, and it’s very sweet. Basically, the investment firm “boiled off” its unhappy clients until it had a very sweet mixture of happy ones. 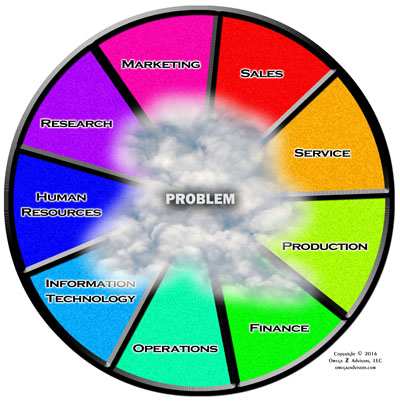 The all things equal assumption will prevent people from seeing the integrated aspects of a problem.

Beware of How We Define Problems

It’s very easy to lead people to think any silent fact in a comparison stayed the same or does not matter.  For instance, “We have a sales problem,” leads people to think that the problem is not with anything else.

Assumptions though make communication and thought easier. We can’t avoid them. In business people will use them a lot. Squirrelly reality and its problems don’t care though. They do their thing regardless of what runs through our minds.

Other posts in series: Challenging Assumptions