Wisdom Of Crowds, The Theory

In short, the theory behind the wisdom of crowds says that a group can make better decisions than any person, even an expert. It sounds like people don’t need smarts. All they need are others.

Now, go to the theory’s fine print. It holds true if we shroud the crowd from each other. This takes the form of four key criteria by Surowiekci:

This means groupthink can’t infect the crowd in any way. Groupthink is not wisdom.

Wisdom Of Crowds, The Hype 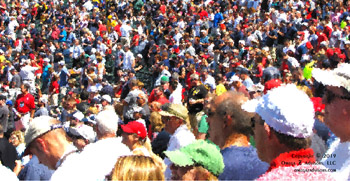 After reading the fine print, one finds it’s hard to prevent the wisdom of crowds from becoming infected by groupthink.

Any idea can be like a movie. It has marketing aspect. For movies, trailers hype them. The same happens with ideas. Take a look at Amazon’s “trailer”:

“Large groups of people are smarter than an elite few, no matter how brilliant . . .”

“James Surowiecki argues that people, when we act en masse, are smarter than we think.”

This hype easily leads people to think that they’re going to hear how smart crowds are, any crowd. By contrast, consider this trailer:

“Learn how and when crowds of people can be smarter than the elite few.”

Wisdom Of Crowds, The Reality

The shroud around the wisdom of crowds make theory more appealing than reality. It’s hard to meet the four criteria even Surowiekci says. If they aren’t there, the wise crowd suffers groupthink.

Therefore, when considering the wisdom of any crowd, see first how the above four criteria come into play. Remove that shroud of simplified theory and hype. Even if one can’t control them, they shed light on what might infect a “smart” team with groupthink.