Everyone is a people person until people are the problem. Almost all problems at work have a human aspect. That means solving people problems is a key problem solving skill.

The Secret To Solving People Problems

The secret to solving people problems effectively at work is finding the viewpoint from which all are right. The best solutions lie here. Now, this does not mean partially right. It means completely right. 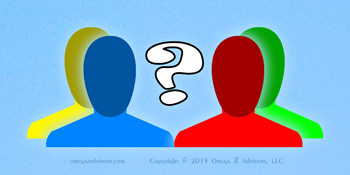 The secret to solving people problems at work is finding the viewpoint from which all are right.

The secret’s practicality hit me when a customer survey said the client’s service people did not discuss new products with customers. Yet, the client had spent money and time to make sure and to verify that they did.

So, the solution was to shore up the documentation in and after service meetings. That included correspondence prior to the meeting, agendas and material given during it and correspondence after it. All sought to reinforce what the service people said in the meeting.

In another case, a manager complained about her top machine operator showing up a few minutes late too often. The employee thought her manager did not appreciate her. She was nit-picky and mean.

After I discussed a “nicer” approach with the manager, she said, “In other words, you want me to baby her.”

I replied, “Yes, try it. You will think it’s babying but she won’t. She’ll just think you’re being nice to her. After all, this is your top operator. If she wants to be babied, then do it if it’ll solve her showing up a few minutes late.”

Solving people problems means avoiding the right-wrong trap. Under pressure, defenses go up. Seeing things as black or white, right or wrong tempts us. That trap though forces us to take sides.

Even if the situation involves rules or instructions, people read them differently. It shows up as miscommunication. That’s why reinforcing messages – such as in the macro example – helps.

All computers see things as some form of ones and zeroes, yes and no, right and wrong. People don’t. They see things differently and still work together. Computers can’t. They crash. The secret to solving people problems is don’t treat them like computers.