While helping a non-profit, a board member said, “We can only deal with a problem if we know there is one.” Here, understanding knowledge states shows why this as false. In this case, the statement ignores the idea of prevention, dealing with problems before they arise.

Of course, I could prove it’s a problem when my car does stop running or when I look at the last time I changed its oil. Finally, I’m able to quantify the problem in terms of the cost of an oil change. Or, I can do so by the cost of fixing an engine that freezes up from no oil or that wears down too fast from dirty oil.

Thus, understanding the state of knowledge behind facts and other information helps to assess them better. To that end, I’ve created the map below. It has five basic states: Unknown, Aware, Know, Prove and Quantify. Each is a subset of the previous one: 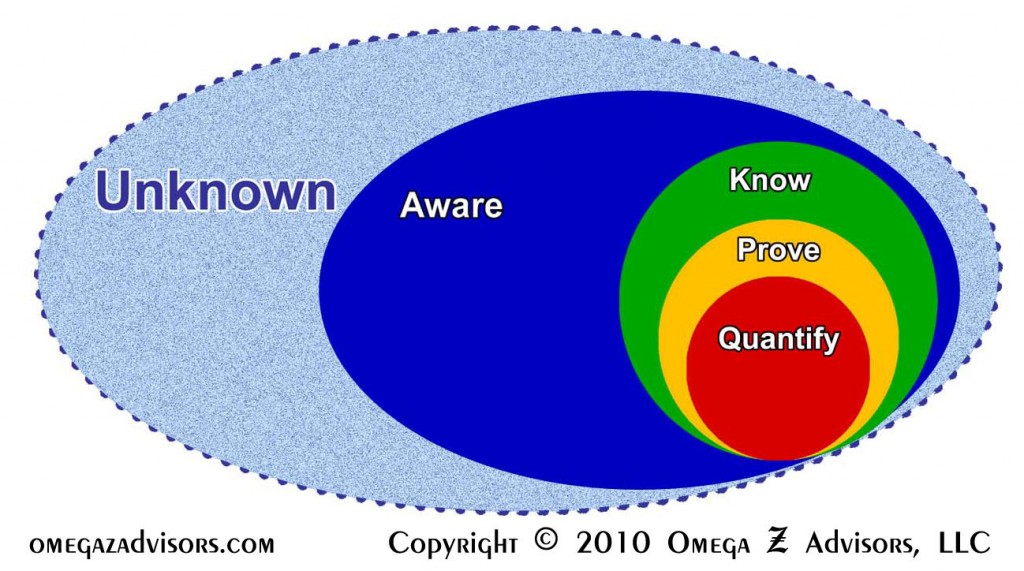 The Relationship of Knowledge States To Reality

This map of knowledge states covers all of reality. Therefore, by looking at knowledge in this manner, the map shows how much of reality one excludes at any time. For instance, only accepting what is quantifiable and provable ignores a huge chunk of reality. This chunk does not go away. It’s still there.

For instance, imagine warfare or the game of poker. Suppose no one took action unless proved it was the right one. This limits the possible actions. Yet, life goes on. It does not care what people can prove and quantify.

Business is not immune to this. Thus, how people deal with what they don’t know or barely know determines success far more than what they can prove and quantify.  Returning to the advice of the above board member, this means only dealing with what we know invites failure. It invites missing some great opportunities too.