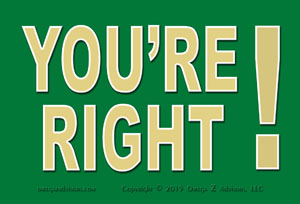 Complimenting is critical to success and this two-word compliment is very impactive.

Complimenting is critical to our success. There are many ways to do it. Some ways are better than others.

Complimenting is critical to networking upward. It presents us as positive and happy. It massages egos and lowers guards.

Strategic complimenting is critical to leadership. It builds organizational cultures and teams. It motivates and develops people.

Want to test it? Try it out on spouses or significant others. Be prepared for a jibe or two though.

If you do not want to test it. I use this clip from the comedy movie, Animal House, as an example of the power in “You’re Right” Compliment.

A cavalier fraternity, in which a brother Bluto played by John Belushi is trying to rally the house after being expelled from college for failing grades and unbecoming behavior. After his rally cry failed, one brother finally yelled, “Bluto’s right!” The look on Bluto’s face is a combination of surprise, bewilderment and doubt. We can tell that no one ever told him that.

Complimenting With It Can Be Difficult

People tend to find it difficult to compliment others let alone tell them they are right. They might have received few compliments in their lives. They might fear coming across as insincere.

Compliments can trigger fears of weakness. The warm and fuzzy feelings they stir can do this. Saying someone is right might seem as though we are saying we are wrong.

Go ahead. Practice. See for yourself. In your next conversation, find one thing the person was right about. Compliment him. Even if nothing happens, you will be happier.

Other posts in series: Strategic Complimenting