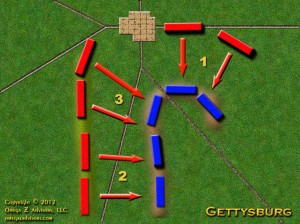 In business, people often see aggressiveness as a virtue; however, it can be a defect. Exploring this will give us insights into dealing with aggressive personalities in our lives and examples of how different perspectives help in problem solving.

The Battle of Gettysburg in 1863 from the American Civil War, the turning point in that war, is a good initial example.  The Union won this battle over the Confederates but never attacked. That’s because the Confederates relentlessly attacked a different part of the Union line on each of the battle’s three days (see diagram to right) despite the Union being on higher ground and firmly entrenched. Consequently, the Confederates suffered heavy losses and retreated.

In nature, the article, “Unnatural Selection” from the May 23, 2009 issue of The Economist, reports on the work of Laszlo Garamszegi from the University of Antwerp. He found that the aggressive animals were most likely to be caught in traps. The Battle of Cannae from 216 B.C. is a human form of this. Hannibal had tapped into his Roman opponents’ aggressiveness and hubris to lure them into a trap, thus destroying an army twice his size. In American football, the screen pass takes advantage of aggressive defenses by luring them into the backfield.

In business, we see examples when companies expand too aggressively, thinking they have the “secret,” taking shortcuts and ignoring planning. As a result, aggressiveness produces huge losses for them, just as it did for the Confederates.