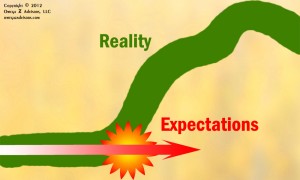 When people’s expectations don’t match the reality we present, they crash and go off road.

As computers and robots are able to perform more of the mental and physical tasks of humans, we are finding they can become more unnerving to us. Why is that?

“Mapping the Uncanny Valley” (The Economist, July 21, 2012 edition) examines the work of Kurt Gray (University of North Carolina) and Daniel Wegner (Harvard) to find it’s a matter of expectations. We do not expect robots to be human – more specifically to have emotions – so when we observe or hear that they do, it unnerves us. They also found that humans who “did not feel emotion” unnerved us because we expect humans to have emotions.

Extrapolating, here’s the lesson for us:

When we don’t conform to the expectations of others, we will likely unnerve them.

As we saw with euphemisms, people tend to prefer their illusions to reality; thus, we could rephrase the powerful line, “You can’t handle the truth,” from the movie A Few Good Men to be, “You can’t handle the real me.” In other words, people will tend to prefer you think, feel, talk and behave according to their expectations rather than as you are.

For these people, societal, cultural and business conventions rescue them by providing rationalizations for this unnerving: it’s rational to be upset with violators of such conventions. In reality though, it’s an emotional response, a function of their personality.

Therefore, pragmatically, you will often need to weigh the risks of crashing their expectations. Your real aspect might just be too much for them.