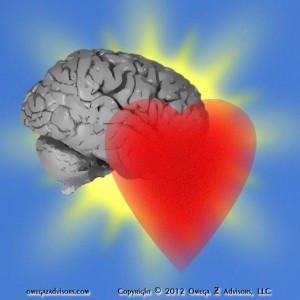 Emotions not logic allow us to make decisions.

One of the more contrarian perspectives that has helped me appreciate people’s decisions is that emotions and its interpretive big sister, intuition, form their foundation. Even a logical decision comes about because of a person’s emotional preference for logic.

While this does not mean logic, reason and rationales are not involved; it does mean they take a secondary, dependent role similar to the way the frame of a house is dependent upon the foundation. In our decision-making, it means we select the rationale (frame) to fit our emotional preferences (foundation), which we more commonly experience as rationalizing.

Increasingly though, as technology and research methodologies advance, science supports this. For instance, the article, “Captain Kirk’s Revenge” (The Economist, December 23, 2006 edition), discusses a person who lost his emotional functions in his brain could not make decisions even though the rational portions were in tack. However, those who lost their rational functions could still do so if their emotional ones remained.

This is understandable when we consider people need motivation to make decisions and motivation is emotional. Rationales alone won’t motivate unless they stimulate our emotions. That is why the root word of emotions is “motion.” It’s active, whereas logic, reason and rationale are inert.

We further see the progress in this perspective with the research of Roderick Gilkey, Ricardo Caceda, and Clinton Kilts. In their article, “When Emotional Reasoning Trumps IQ” (Harvard Business Review, September 2010 edition), they found that the best strategic thinkers showed “significantly less neural activity in the prefrontal cortex [rational functional area of brain] than in the areas associated with ‘gut’ responses, empathy, and emotional intelligence.”

Since we are often experiencing these emotions on an unconscious level, we could feel completely rational. Consequently, all our decisions are emotional ones. We just might not believe it.