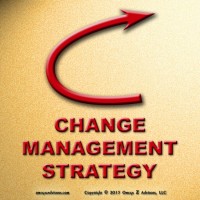 For any change management strategy, it’s important to identify how we and the culture we’re impacting conceptually picture change. This helps us manage expectations. While perhaps initially puzzling, the article “When in Chinatown, You Really Do Think More Chinese” (Harvard Business Review, March 2013 edition) helps by exploring the ways Westerners and Easterners picture change differently. I describe them as linear and cyclical change.

Analogously, we can combine the two as the lives of a man and a woman producing a child. That child lives on as a version (a change) of the parents. The child then goes through his own birth-life-death cycle. In this sense, we combine the progressive, forward feel of the linear change model with the circular feel of the cyclical one.

This combinative approach corresponds to the idea of creative destruction. For companies, this means reinventing itself by holding onto the good from the past (parents’ genes) and by incorporating the new (mutated genes) to thrive in the new world (which is also changing). This gives birth to a related – but different – version of the company.