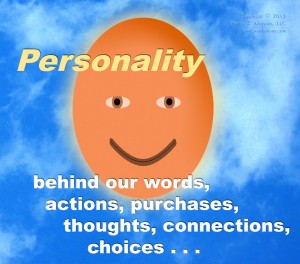 Increasingly, we are seeing the connection between all that we do and our personalities. Why is this  “groundbreaking?” For centuries now, we’ve assumed people are products of their decisions. Educate people with good logic and good decisions will follow. Historically, we’ve expressed this as free will. It then invaded economics with the rational actor decision-making model. The problem is that it doesn’t work.

Inside us is software called “personality.” It’s almost as difficult to violate as it is for computers to violate their software. It can predict human decision making almost as well as it can for computers. Just as behavioral economics is overrunning classical economics, it’s doing so in business and politics.

Admittedly, the accuracy with people is significantly less than with computers but it’s enough to assess people from their Twitter streams (“No Hiding Place” [The Economist, May 25, 2013 edition]). It’s also enough for Google to invest in Obama’s data mining operations (Google’s Eric Schmidt Invests in Obama’s Big Data Brains [Bloomberg Businessweek – May 30, 2013] by Joshua Green).

This wouldn’t occur if exquisite, rational, debate-styled arguments worked. These take no more hold on people than seeds in rocky soil . . . unless we present it in an emotional, relational manner similar to advertising, marketing and merchandising.

Today, it’s about finding people inclined to buy and vote a certain way and then “encouraging” them to do so. Plant the right seeds in the right soil and farm them. Just as we can predict what might grow on a particular farm, we can predict what thoughts will grow in personalities. This extends beyond purchasing and voting. Twitter feeds help you find relationally compatible kindred spirits for all purposes.

What kind of personality is in your Twitter stream? Just look in the mirror.