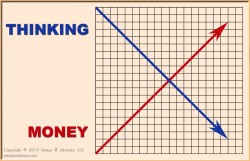 We can make tremendous money when we help people think less. As Alexander Chernev points out in “Customers Will Pay More for Less” (Harvard Business Review, June 2012 edition), “People rely on decision shortcuts, or heuristics, that trade accuracy for reduced cognitive effort.” Translating to a service economy, thinking is the service and simple solutions the byproducts.

Still, just as we naturally seek fatty and sugary foods, we naturally seek ways to reduce thinking especially as information accelerates. Herbert Simon’s bounded rationality suggests the same. He assumes problems are inherently complex, generally more than we can handle, so it’s natural to seek simple, clear understandings even though they don’t accurately reflect truth. Yet, since people tend to view things simply and avoid thinking, assuming the problem is bigger and more complex is an effective problem-solving technique.

As examples of thinking less, we often follow leaders and crowds.  It can be as simple as buying what celebrities endorse, what leaders wear, what friends recommend or what most purchase. Yes, we can say we’re saving our time and money for important thinking, but that’s very much like saying we’re going to delegate practice so our time and energy can be used for major games and performances.

With that in mind, what decisions would be good practice? After all, if you become good, then people will pay you to think for them.