We rely upon groups for much in our businesses. They are vital to success. Yet, what makes them valuable also makes them prone to group decision making failures.

These failures occur on three broad levels within the hierarchy of groups. Each level emits a sign that group decision making failures are likely. These signs tell us that humans are corrupting the decision making processes. The processes will not rescue the group. 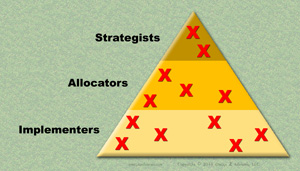 This overpromising ignites a sense of urgency. This causes the allocators to overcommit resources, to commit too soon or both. This creates a sunk-cost trap.

The overpromising and overcommitting puts implementers under extreme stress. Even under normal conditions people tend to be too rosy about their timetables and results. Under stress, this tendency becomes even worse. They also become more dishonest.

These signs sound simple to spot and avoid. Two biases blind people though:

Leaders do have responsibility. There are sycophants in every organization though. They will say whatever they need to say to get ahead. Biased information begins here. These employees seduce leaders.

In most failures, there are many sources not one. These sources are often small. These apply to group decision making failures too. There is no scapegoat. There are many accessories. A bad organizational culture is fertile soil for coalescing these the influence of these sources.

In group decision making failures, corruption of the decision making process happens on all levels in many places. We cannot prevent it by focusing on only one place in the group.