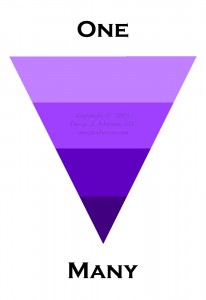 Given many causes of a problem, humans tend to focus on one as the cause rather than the pattern they produce, a form of anchoring. Scapegoats are good examples: blaming one is easier for our minds to grasp than blaming a group. When solutions overweight the one rather than the many, I’m alerted for potentially seeing more problems.

Jonathan Cohn’s article, “The Robot Will See You Now” (The Atlantic, March 2013 edition), discusses the future possibility of robots delivering some aspects of medical care. As Cohn writes, this future addresses two major forms of this alert:

I originally became aware of these when I read that plane crashes usually aren’t the result of a single event but a series of many. Problems are like squirrels; they don’t respect our boundaries, thus requiring a more integrated problem-solving approach.

For example, we often discipline an employee who violates policy. Looking at this holistically, since culture greatly influences people, perhaps it’s the problem. If people routinely cheat policies and get away with it, others will be motivated to do so too. Someone who isn’t a team player could be a byproduct of the culture too. In both cases, what we see as an isolated singularly problem could be signs of something more. Lack of training, processes, follow-up, relationship building, products, services, organization and tools are other systemic aspects usually spawning singular problems on an individual level.

Thus, when tackling problems, focusing too much on a single aspect or a limited set of information should alert us that potential problems might just be around the corner. What singular problem is on your docket today?