Leadership changes people. They can pick up traits such as diminished empathy, thinking and resistance to flattery.  One of the more subtle business management leadership traits is the Stalin Syndrome.

The Stalin Syndrome runs along the lines of “The Emperor’s New Clothes” by Hans Christian Andersen. It is when leaders, especially those who rise through the ranks, devalue or sideline those who know them too well. Stalin was notorious for doing this. He even removed them from public photos.

In business settings, I first ran into this when a business owner sold his business. He invested his proceeds with a new firm rather than the one that had been with him since he started. 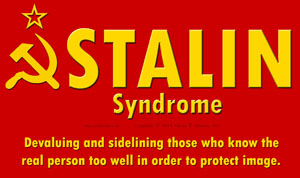 The Stalin Syndrome is one of many business management leadership traits that help to shed light on leadership’s dark side.

In a workplace experience, a manager who rose through the ranks begin to discount and push out her former colleagues. They knew her more as a colleague, not as a boss. Unconsciously, she translated their casualness to her bosses as insubordination and procedural violations.

Two main emotions fuel the Stalin Syndrome. First, people like to believe their leaders are special. Second, leaders like people to believe this as it is a source of power.

Divine right in medieval times tapped these two emotions to say God gave kings their right to rule. In ancient times, rulers were direct descendants of gods. Rulers were special. They were above people.

Thus, leaders’ images are important. The degree to which celebrities protect their image is an example. In short, protecting image protects power. Knowing the real person can threaten this image. “He’s just like you and I.”

For instance, the cliché, “They put their pants on one leg at a time,” seeks to erase the “larger than life” image of a stronger team. It brings them down to earth. “They’re just like us.”

Therefore, the Stalin Syndrome is about protecting image and its power. It keeps the leader special, not just a mere human. Knowing the real person threatens this image.

That is why it’s not uncommon for employees to say of promoted colleagues and friends:

Stalin wanted to project a “larger than life” image. Those who knew his real story, his real self, threatened that. There are many business management leadership traits. Most are good. Some fall on the dark side of leadership. The Stalin Syndrome is one.