What these experts don’t share about their models is the fine print. It makes the laws toothless. Two key points make it so. Anyone can:

In a court of law, judges or juries can interpret and apply the law to say:

Rules, procedures, guidelines and precedents guide them on these points. They help to ensure that different judges and juries apply the law as uniformly as possible. The laws of leadership have no such safeguards. 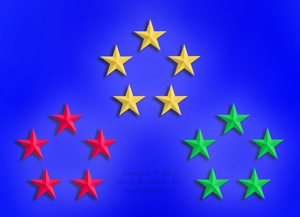 The Lawlessness in Leadership

Now, let’s imagine if judges and juries could interpret and apply laws however they liked. Uniformity would not exist. Lawlessness would ensue.

That is why the law frowns on “taking the law into your own hands.” It needs to ensure consistent interpretations and applications. Yet, when selecting leaders, everyone takes the laws of leadership into their own hands.

For instance, let’s take trust. Experts often cite it as crucial to leadership. Most would agree that people need to trust their leaders.

On the other hand, applying the four bullet points above creates problems. People would vary on:

What kind of laws allow people to take it in their own hands? Isn’t that lawlessness? As a result, any laws of leadership are a fig leaf covering the naked truth that leadership has no laws.

Applying the Lawlessness of Leadership to Trump and Hillary

When we apply our trust example to Trump and Hillary, we find some people trust:

Who’s right then? They all are. That’s because they can interpret and apply the laws of leadership however they want. They can bend and twist them to fit their views. The key takeaway is this:

So now, let’s apply this takeaway to the four bullet points at the beginning of this post. With Trump and Hillary, it means that people who like either one, are more likely to say:

Of course, the reverse is true too. Those who don’t like them are more likely to say:

The Cost of Thinking Laws of Leadership Exist

In the end, we can apply this example of trust to any law of leadership. We will find leadership has no laws. Irrefutable, objective standards don’t exist.

What’s the cost of thinking there are laws though? People discount leaders they don’t like. They don’t see them as leaders. They’re lawbreakers. As a result, they underestimate them.

In reality, those supporters know full well what a leader is. Their leaders fulfill every law. That is because they took the law into their own hands. They interpreted and applied it as they wanted. The unfavorability of Trump and Hillary show the true lawlessness of leadership.

Thus, when people are shocked by the leaders they get as they are with Trump and Hillary, it’s because they put too much faith in the laws of leadership. Look at the fine print. These laws have no teeth.

That means anyone, anyone can become a leader. Even those we don’t see as leaders can become leaders. That is because others do. That is the true nature of the laws of leadership: lawlessness in selecting leaders.

Related Post: “4 Leadership Lessons from Donald Trump Phenomenon” might be of interest especially since I wrote it back in August 2015 before any voting took place.

Other posts in series: Leadership - The Secret