Words give insights into people’s personalities. Science though has only recently accepted this. Assessing personalities by words people use has existed for a long time. I first ran into it in the 1990’s. The professional who shared it with me had been using words in this way decades before that.

How Assessing Personalities by Words Works

This works because every word triggers emotions in people. That’s connotation. It’s the complement to a word’s definition, its meaning.

For instance, house and home have close meanings. However, the emotions they trigger differ greatly. A favorite example of mine is escargot and snails. Again, their meanings are similar. Yet, the emotions they stir, the connotations, differ.

Words can also differ in meaning but have similar connotations. For instance, flexible, fluid and dynamic seem to go together just as strong, stable and consistent do. The emotions they convey have something in common. Yet, each word in each triplet is very different.

Thus, when we look at the words people use, we are looking for patterns in their connotations. These patterns disclose personal preferences. In turn, this allows us to link them to personalities. 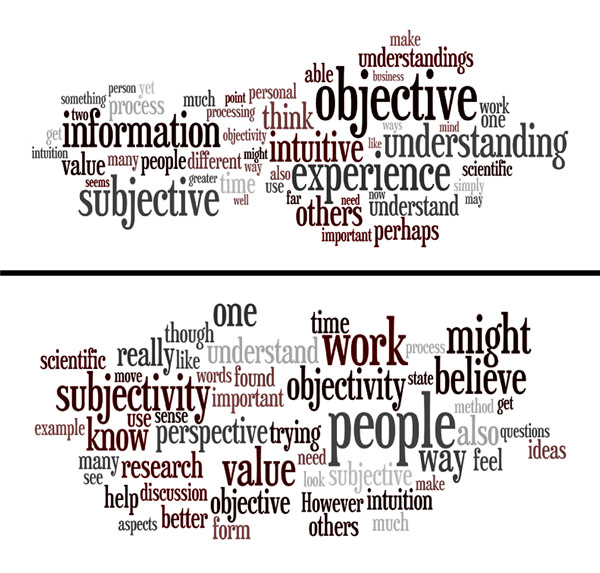 These word clouds are from a lengthy email exchange between two colleagues on a topic we discussed. Each represents a different person. There are distinct differences in word choice. Even if they used the same words, the degree to which each used them differs sharply too. It’s from such differences that assessing personalities by words begins. (Word clouds made at Wordle.net.)

Here are examples of two sites that have computerized these patterns. They link them to the Big Five personality traits and others:

In using these sites and other such tools, we need to keep two things in mind.

First, assessing personalities by words via computers is still quite new. Whereas professionals can factor in context and mood, computers can’t. That’s why computers need much larger samples of text than humans do.

Second, it is not uncommon for these results to differ from survey-based tests, the most common type of personality tests. One or both could be off. Neither is as reliable as a professional assessment done in person by a qualified professional.

Future of Assessing Personalities by Words

The future of assessing personalities by words is bright. It addresses many of the shortfalls in the survey-based tests. That’s because it’s an inferred method, similar to projective ones. That means it deals with how people think, speak and behave in real life, not how people think they do.

As computers and artificial intelligence advance, assessing personalities by words will expand. It will become more reliable. It’s already more convenient than survey-based tests. It needs to become more adaptable to context, the types of writing such as business, creative and personal.

Professionals can already do this. As with chess and other games, it’s only a matter of time for computers to catch up, ten years tops.