The extraversion personality trait of the Big Five is defined very shallowly. This is very common among many definitions of extraversion. They focus mainly on its social aspects.

Sparks versus Blast Furnaces, An Analogy

The bias is shown best by the trait called “energetic.” In most models attribute it to extroverts. Their descriptions imply something you can see. You can observe it. In short, it’s superficial. It’s not a trait with depth.

For example, a manager said, “Mike, I want someone for this job with a spark.”

I responded, “All right, just remember that when you see sparks you are also seeing wasted energy.”

“Take a blast furnace. If it’s working well, you see neither sparks nor flames. Yet, you feel its heat. Some people are like sparks. Some are like blast furnaces.”

If extroverts are the sun and stars. Introverts are stellars and supermassives. The first give off light. The others are black holes with strong pulls. 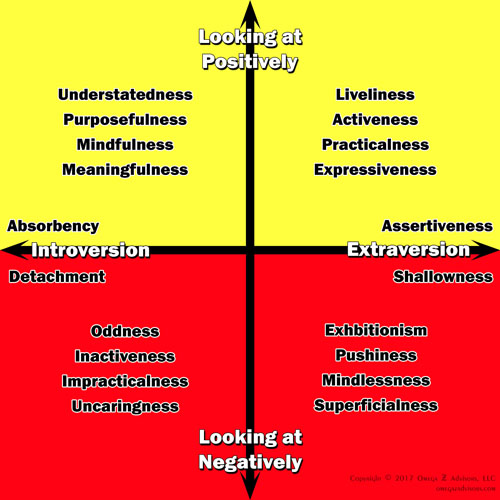 The extreme version of the extraversion personality trait comes off as shallowness. Since no one is a pure extrovert, introverted traits help offset shallowness in people.

Extraversion Personality Trait in its Extreme

My intro post to the Big Five, gave tips to offset biases in their descriptions. The first is to show the extreme form of the trait. Extraversion’s is shallowness. It’s blind to the deep meaning behind things. For example, “Don’t read too much into things,” is an extrovert talking.

The second part of my tips is to describe the force that tempers extreme extraversion. That’s introversion. Introverted traits exist in extroverts. They’re just less dominant.

In other words, tempering will make exhibitionism somewhat understated. It will add purpose to activities, depth to ideas, and more sincerity to emotions.

Examples of Extraversion’s Dark Side

More specific examples of extraversion’s dark side include:

Extraversion in the Workplace

I knew a five-year old girl who could name every dinosaur upon sight. As impressive as this was, she did not know much about them. Naming is not knowing.

Naming is an extroverted action. It shows up as definitions and labels. They aide communicating and learning.

In the workplace though, it’s easy to mistake naming for knowing, an introverted action. That’s because most don’t define extraversion in anything but a social context. Who would do that? Of course, extroverts.

Don’t let them fool you though. Extraversion has non-social aspects too . . . especially at work.