Symbolic actions have power. Leaders who tap their power do better. Yet, understanding symbolic actions is not easy. The Trump Macron handshake helps here.

In the same sense, handshakes serve a practical purpose as part of the greeting between two people. They are simple. They are uneventful. Yet, in the everyday world, we get a taste of their potential as symbolic actions. This happens when two who share a mutual animosity “make up” or “bury the hatchet.”

Trump’s handshake has value all its own. A search of “Trump handshake” proves this. No shortage of interest in it exists. More importantly, that value extends well beyond its practical one. There are five reasons for this: 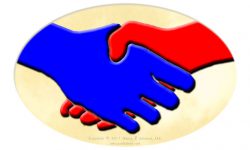 To be effective leaders must tap all power sources including that of symbolic actions. The Trump Macron handshake shows how to do this.

Yet, what makes the Trump Macron handshake so significant is that Macron outed it for what it was, a symbolic action:

. . . my handshake with him, it wasn’t innocent. One must show that you won’t make small concessions, even symbolic ones (my emphasis) . . .

To go along with this, reports exist that French ambassadors had warned Macron about Trump’s handshake. In other words, he purposely tapped the power in this symbolic action for his own ends. It wasn’t just any handshake he sought to exploit. It was Trump’s handshake.

The Fickleness of Symbolic Actions

In the end, the Trump Macron handshake leaves us a very key point. Symbolic actions are fickle. They have a heart of their own. We don’t necessarily control them.

Anything at any moment can become symbolic. Moreover, we do not own what we make symbolic. Anyone can seize and manipulate it for his own ends. Witness Macron with Trump’s handshake.

As their handshake showed, symbolic actions have power. However, all can tap that power. It knows no master.