Making good leadership decisions is easy to know. Doing it is another matter. A Harvard Business Review article talked about four behaviors that set successful CEO’s apart. The last two can’t work without the first two though. So rephrasing I’m highlighting these first two: 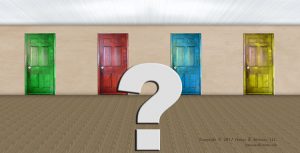 Many fear making decisions. It takes the right temperament. Procrastination is easy. Seeking consensus often serves as a great excuse for delay. As a result, unmade decisions pile up like unfinished home improvement projects. They clog and frustrate. They undermine leaders’ credibility.

For example, in programming AlphaGo, the game of Go had too many moves for a computer to handle. So, instead of seeking out the best move, Google had it pick from a set of great moves. Now, if a board game had too many moves to consider, what about a business decision?

Taming our fear of uncertainty means adapting quickly. For instance, being confident doesn’t mean being right. It also doesn’t mean going “all in.” Even in warfare, reserves exist to address surprises and opportunities.

Experts often cite consensus-driven decision making to gain input and agreement. Together they gain commitment. This, of course, takes time. Building relationships 24/7/365 shortens this. The article calls this “engaging for impact.”

Relationship building means soliciting input. It means gaining commitment. One might not agree but he trusts the leader to look out for him and to tell him when he can’t. Facts don’t influence. Relationships do.

In this sense, relationships become fertile soil from which leaders plant commitments and harvest great outcomes. Even the best ideas don’t take in bad soil.

Making Good Leadership Decisions Boils Down to Problem-solving and Influence

In the end then, it boils down to solving problems and influencing people.

Yes, it’s easy to know how to make good leadership decisions. Doing it is quite another matter. See why now?