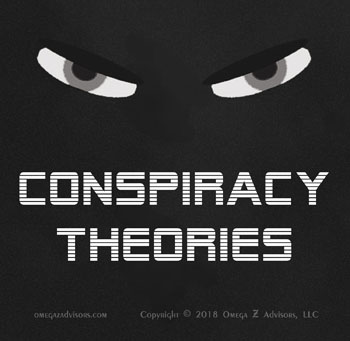 As with any idea or group of ideas, they will attract some personality types more than others. Conspiracy theories are no different.

Related to this is difficulty with complexity. A big event must have a big cause. It can’t be a bunch of small ones that just happened at the same time. That’s too much to grasp. It’s much easier to think a master, dark force coordinates all of them.

Uncertainty and complexity play in random events. They play in events too where people seemingly coordinate their actions. In fact, the latter describes Adam Smith’s “invisible hand.” He marveled at how each person’s pursuit of self-interest seemed to grow the pie without anyone telling people what to do.

Making this worse is their difficulty with complexity. They are likely to see flexibility and nimbleness in carrying out change as ambiguity and volatility. As a result, these will feed seeing sinister motives for the change.

Finally, coworkers believing conspiracy theories have weaker resistance to dark, false info that feeds their beliefs. Thus, their fear of uncertainty and complexity will show up in the easy belief of rumors that paint the company strategy in a bad light.

Of course, this is not to say all coworkers believing conspiracy theories will have all these traits. It also does not mean that non-believers can’t fear and resist change too. What it does mean is that conspiracy theories attract certain personalities. All ideas do.