Let’s face it. We’re witnessing open offices failing. Admit it. They only came out to cut costs. Period. Where’s the proof? Privacy is invading them.

Yes, they can promote collaboration. Is it the best way though? After the collaboration, where’s the privacy to get work done? To concentrate? After all, if they’re so good, why don’t execs have them? 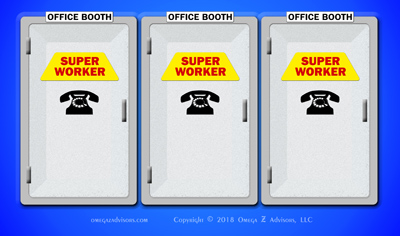 The failure of open offices to promote employee engagement and productivity is causing privacy’s return to the workplace. It’s taking the form of phone booths. Will a phone booth be your next office?

Yes, collaboration can lead to greater productivity and innovation. Does breaking down walls do it though? It does not seem so. In fact, the old style cubicles worked better.

Opening up cubicles resulted in more emails and fewer interactions. Without some privacy, people sent emails rather than talk.

Still, even cubicles are noisy, conveying a fishbowl ambiance. Yet, they allow employees to personalize their spaces. The presence of pics of family, children and friends improve work. They not only increase productivity. They make employees behave more honestly and altruistically.

In addition to the rise of phone booths in open offices, the early invasion of headphones gave early signs of open offices failing. People value their privacy.

This privacy helps them get their work done. It helps recall and mental math. It also gives them greater job satisfaction. Based on this, it’s not hard to see why employee engagement hasn’t improved since its recording.

Personalities And The Right Mix

Of course, personalities play into this. Only the most extreme extroverts seem to work best in open offices. Still, having a place to call “home” helps. For most others, some mix of privacy and openness seems best.

In most cases that will mean employees having their own private space. As for the openness needed for collaboration and innovation, it will come from common spaces employees frequent. In the past, these were hallways, snack rooms, water coolers and restrooms. Today though, creative floor plans will go beyond these.

In the meantime, privacy will continue its onslaught on open offices. Work will get worse. It will force change as it already has.  One day, the new office might even be a phone booth.