The most conspiratorial secret about experts is the way money coordinates behaviors among those with an interest in research. They include grantors, researchers, publishers, peers and institutions.

As a powerful incentive, money encourages people to behave in a coordinated way without any central communication network or leader. Also, since research must make money for all parties, good, but unprofitable research, will not surface. These two facts can easily make such coordination appear as a conspiracy against good research. 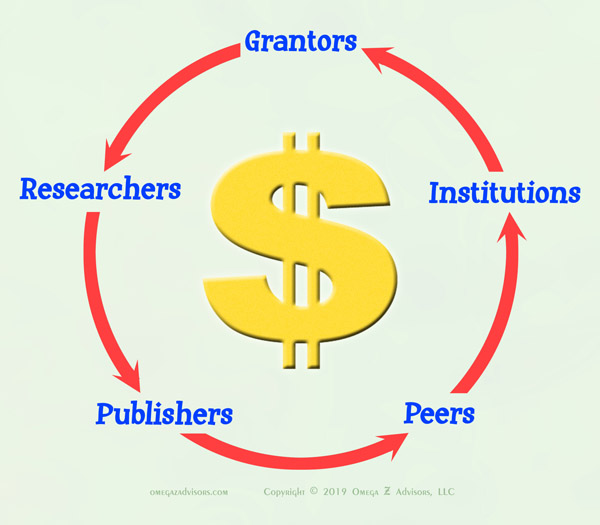 Directly and indirectly, money has a huge impact on the production of the research produced by experts.

The Conspiratorial Secret About Experts As A Cycle

We can express the conspiratorial secret about experts as a cycle. It has five major steps. Each step represents one of the major interest groups: grantors, researchers, publishers, peers and institutions.

The first step is the grantor of research funds. Corporations and government are the major sources. From a monetary viewpoint, they aren’t going to give grants to research that isn’t in line with their interests and purpose.

Researchers occupy the second step. They write grants to secure funds. Since the nature of their research will depend on grants, grantors’ needs will influence what they will research.

Once researchers complete their research, they market it. That means finding a journal to publish it. As the third step of the cycle, publishers want research that sells their journals. This includes getting their journal mentioned in more general media like newspapers, magazines and television.

Other researcher’s peers are the fourth step. They are the first, primary target for marketing in journals. That’s because citations – experts citing other experts’ research – play a critical role.  They are like votes, the more the better.

These citations work the other way too. Citing peers’ work in research curries their favor. This encourages peers to read and refer the work. More so though, grantors and publishers use peers to check proposals and submissions. Thus, this adds a strong political aspect to the cycle.

Institutions form the fifth part of this cycle.  They rise in status as their researchers do. More key, the selling of their institutions to investors and donors becomes easier and more profitable. It can even mean grants for the institution.

The Conspiratorial Secret About Experts

Yes, research has a noble aspect. Business does too. However, unlike business, it’s hard to see the money in research. As a result, people don’t see it as a business. That’s the secret though. Research is a business. That makes it political and cut-throat too.

Finally, since it’s hard to see the money in research, it’s easy to think a conspiracy is at work when good or needed research does not rise to the surface. Most times though it’s not rising up because there’s no money in it. Again, research is a business. “Show me the money.”

Other posts in series: Secrets About Experts