We learn grouping early in school. We also learn that many ways exist to group the same things. Yet, we don’t learn how grouping turns our thoughts to stone. This is the source of grouping causing mistakes that overweighs similarities

Now, form two groups. One will contain grids with mostly red squares. The other with mostly yellow. We get Figure #2.

Next, look at these four in Figure #3. Pair them with one that seems most like it. 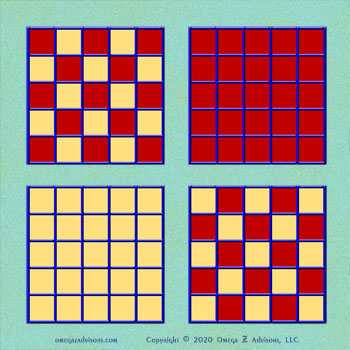 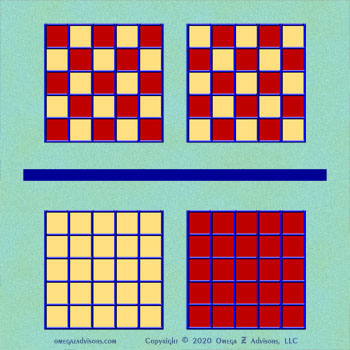 Figure #4 shows two pairs. One contains a pair of grids of one color. The other a pair of checkerboards.

Yet, each pair contains members from different groups. In effect, the initial grouping hid how these were the same. They were different.

Of course, none of this is new. We know we can group things in many ways. For instance, in our example, we could also group by grids with all red corners, all yellow corners and those with different colored corners. Thus, we form three groups as shown in Figure #5. 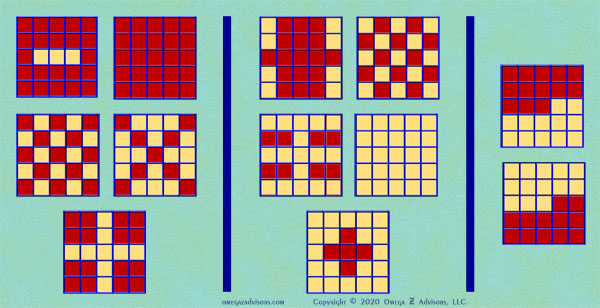 This shows too that how we group things matter. It affects how we see things. Still, we knew that. Yet, if we continue to group these grids in many ways, more groups form. We could end up with more groups than grids. This makes analyzing these grids harder, not easier.

As a result, one grouping will become more important than others. That group becomes anchored in people’s minds. Anchoring engraves it in stone, the source of groupings causing mistakes.

Think of two warring armies. One moves to high ground and sets up a defense. It’s easy. It just moves there. The other army wants it too. However, it must now fight for it. It can’t just move there. That’s much harder.

That high ground is the mind. Once that first army, a thought, occupies it, it’s tough to drive out. It drives people’s thinking. They budget, invest and build around it.

Now, returning to our grids, let’s say they change. Grouping by whether they’re mainly red or yellow might hide this change.

For instance, take the solid color grids. Changing the colors of the corners as in Figure #6 won’t change their original groups. They would remain with their mainly red or yellow ones.

Yet, they changed. Our analyses won’t show them though. Both groups show the same number of grids. That’s because they’re based on grids being mainly red or yellow, not defined by the colors of their corners.

This is how businesses miss the changes in their customers for instance. Their current groupings hide the changes. Their default reports and analyses are all oriented towards those original groupings and segmentation.

In short, grouping forms the boxes that trap our thinking.