People have a natural aversion to risk. It becomes much stronger in a crisis too. Uncertainty has a lot to do with it. Dealing with aversion to risk and uncertainty then becomes key to working through a crisis.

Crises change current dynamics. They do so quickly. Thus, the classic mindset of analysis, planning and rollout does not work. That’s because so much change is coming so fast that it discredits facts and analysis quickly. This undercuts any attempted rollout.

Moreover, crises don’t allow the luxury of waiting for the situation to stabilize. It’s like waiting to see what happens to a high-level bridge during an earthquake before crossing it. What about the ledge we’re on? We’re so focused on the bridge we don’t consider it falling into the abyss too.

Speed, Testing and Small Steps Rising To The Rescue

Three aspects form the mindset necessary to dealing with aversion to risk and uncertainty in crises: speed, testing and small steps. Take action. Do it fast and small. Assess results. Respond and adjust quickly. Repeat.

Speed takes priority over preparation, over analysis. Yes, mistakes will rise as a result. Taking small steps and catching them quickly will reduce their risk. Successes will rise too though. Heroes in anything don’t become so because they make zero mistakes. Their successes outweigh their failures.

In poker, where all other factors are the same, a $100 bet for a player with $300 carries more risk than one with $10,000. In short, the first player is more likely to fold than the second.

The same holds true for managers. A $1 million decision carries more risk for a manager with a $3 million budget than for a $100 million company. The company won’t go under. The manager could get fired though. 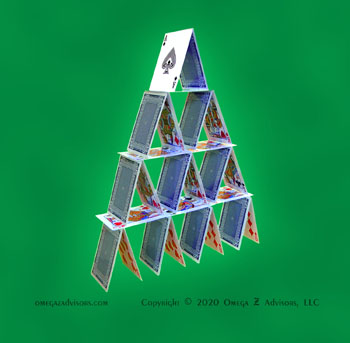 Crises turn the status quo into a house of cards, forcing change where inaction and delay are options only causing collapse.

So, the manager is neither likely to raise big ideas nor endorse them. Couple this with established rules and protocols and sizeable systemic barriers exist to dealing with risk aversion. Crises are such because they upend the rules.

Dealing with Aversion to Risk

Therefore, no manager, because it’s her “area of responsibility” should have final say over actions. A collective “wisdom of the group” weighing them in terms of the firm’s (not the manager’s) success becomes key.

Finally, when it comes to the actions, positioning them as guidelines works better than as rules. Rules shut down thinking. For testing and assessing actions to work quickly and accurately in big crises, frontline employees will make the biggest difference.