It’s difficult to defend yourself emotionally as a sensitive person without understanding the unconscious. People interpret their worlds on two levels: conscious and unconscious; however, the boundary between the two varies individually. 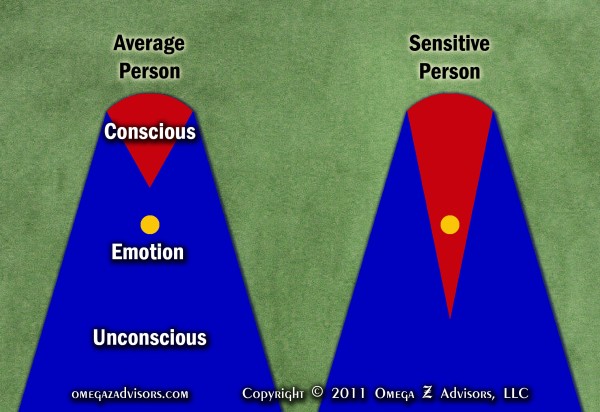 Thus, if people can have varying degrees of conscious awareness, it follows that the interplay between the unconscious and conscious will vary too. The diagram accompanying this post shows the difference between a certain emotion affecting an average person and a sensitive person.

In this situation, the average person isn’t consciously aware of the emotion; however, the sensitive person is. Now, this doesn’t necessarily mean the sensitive person will know why the emotion is there, but he will feel something. On the other hand, just because the average person isn’t aware of the emotion doesn’t mean he won’t be affected by it. It will appear as a rationale for thinking, doing or saying something and tell us much about his emotional state and personality. This holds true regardless of whether he’s aware of this.

Consequently, sensitive people are more in tune with people and situations’ emotional aspects. That’s why many of them can quickly assess the mood of a group without even talking to anyone. The problem is that they often let themselves be convinced their feelings are nonsense. Unfortunately, this is analogous to a group of blind people convincing a seer that he’s hallucinating when he sees colors.

Other posts in series: Emotional Self-defense for Sensitive People