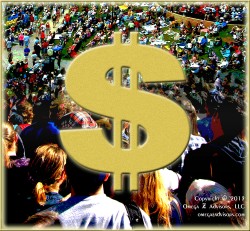 Once upon a time, long, long ago, a successful retail executive confided that in college she didn’t do well in economics. She mused how that could be considering her successful career at discerning consumer tastes. I replied, “Well, that’s because you’re good at understanding how real people behave. Economics is about fake people. It didn’t make sense to you because deep down inside you knew people didn’t behave the way economics said they did.”

Supporting this comment, Brendan Greeley’s article, “Economists Discover the Poor Behave Differently From the Rich” (BloombergBusinessweek, November 7, 2013 Edition) tells of an economic conference in which economists finally concluded that “people are different.” When trying to interpret consumer behavior, economic models use a “’representative agent,’ a single imaginary person who stands for everyone.” That means it doesn’t matter whether it’s your dad, mom, spouse, child, friend, enemy, boss or co-worker, the models assume same behavior from each. Worse yet, they all assume they behave rationally and plan for their future. Sound like all your connections? Wonder why these models poorly predicted outcomes during and after the financial crisis?

In defense of economics, behavioral economics is trying to rectify some of this by incorporating more psychology. Others, like Per Krusell of Stockholm University, are developing and working with “multiple-agent models” that will allow assumptions of people being different.

But, let’s return to our retail executive. Again, perhaps economics didn’t make sense to her because it’s not sensible? Still, how many times do we make decisions assuming all people, all consumers will behave similarly? Are we as guilty? I guess economists are just human too, and humans are frequently illogical and irrational. So, doesn’t it make sense that their models should be too?