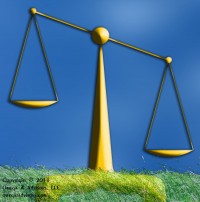 Our Twitter exchange regarding a quote of mine encouraged Dr. Julie Rasmussen to suggest that I incorporate it into a post. She found applicability to her experiences with healthcare workers:

Laws make people immoral because they believe if their action isn’t against the law it must be okay.

We’re taught to obey the law, it’s very ingrained. We often set our moral compasses (or aspects of them) to it. We like laws and morality to align. Otherwise, cognitive dissonance (more) arises. Which do we follow? Rosa Parks resolved it by upholding the morality of equality. Rasmussen’s healthcare workers resolved it by working around rules, a milder form of law, to provide care and by feeling badly about it.

So now, consider Jesse Willms (“The Dark Lord of the Internet”, The Atlantic, January/February 2014 edition). He “has been sued by the U.S. Federal Trade Commission, Microsoft, Oprah Winfrey . . . But he has never been charged with a crime.” Willms runs spam campaigns. He usually buries lucrative provisions in seemingly very normal, innocuous purchase disclosures. He knows people rarely read them. Some include charging credit cards extraneous monthly membership fees. The stated procedures to halt this (if people ever catch these relative small amounts on their statements) are often difficult to find and onerous to execute. His defense is that people should have read everything. He hasn’t broken any law warranting his arrest despite many consumer complaints and civil suits.

Consider finally the financial crisis. It’s perfectly legal to make all the money we want at the expense of our homeland’s and fellow citizens’ financial security. Is it moral, ethical and patriotic?

Thus, in reality, the law isn’t about what’s right, it’s about what’s legal. If this sounds strange, the law might be giving us a false sense of morality.