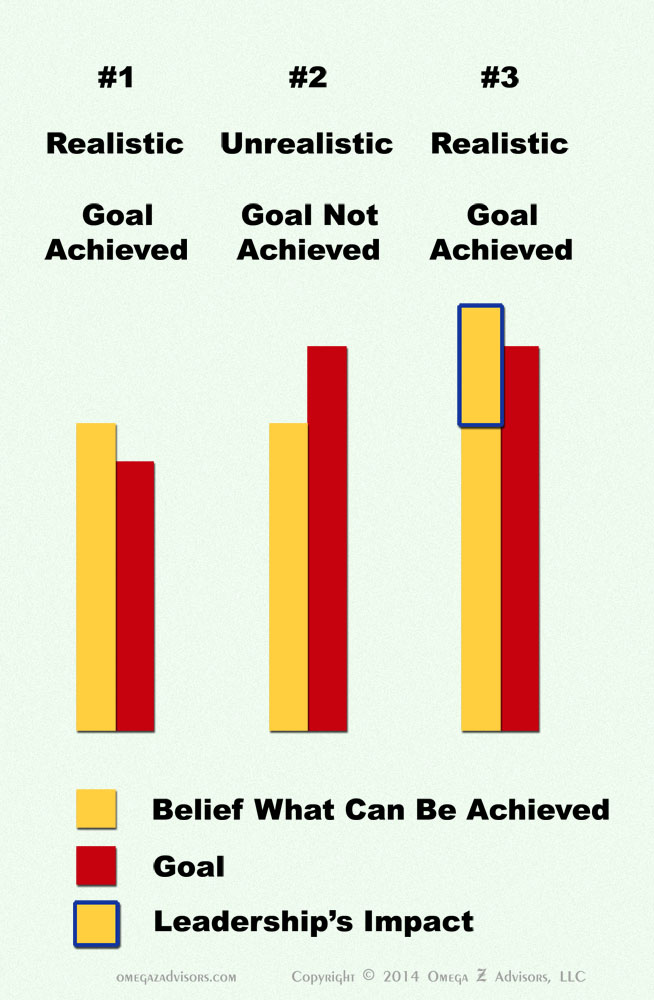 Leadership influences goal setting by expanding what people believe they can achieve.

Leadership’s influence on goal setting results in people believing and achieving more than they would with mediocre management. It’s where leadership’s affective essence meets reality to produce concrete outcomes, to bring about change. Growth cannot occur without change; it is change.

When Priyesh Patel asked about the significance of influence in leadership, that influence results in accomplishments. Accomplishments manifest themselves in setting goals and achieving them. To appreciate leadership’s influence, let’s explore the emotions behind goal setting.

First, it’s commonly known that goal setting helps people achieve higher performance levels than if they had no goals. What’s not commonly known is its corollary: if goals are higher than what people believe they can accomplish it’s worse than having no goals. Graph #1 in the diagram illustrates the first scenario and Graph #2 the second. When people believe goals unrealistic, they’re demoralizing and counterproductive to performance.

Graph #3 then illustrates leadership’s influence. Leadership helps people believe they can achieve more, achieve higher levels of performance. Thus, goals that they would have seen as unrealistic become realistic. This leadership premium is the difference between spectacular outcomes and inertia resulting from numbness to repeated, grandiose initiatives.

The underlying emotions fueling what can be achieved will tend to reflect three key triggers: security, growth and uniqueness. The size, longevity and history of the firm, leadership and employees generate secure, confident emotions saying this can be done. High-growth even in young firms often fuel belief that even higher performance levels are possible. A unique product, market, process or culture, can emote “destiny is on our side.”

Leadership always operates within a context, so leaders use context to leverage their influence. This occurs on the interpersonal level. It’s about helping employees to feel good about themselves and developing their confidence. In short, it’s about relationships.