Many companies rely on interviews and reference checks in selecting and hiring new employees. Of the common practices, this is the least effective way to predict job performance. Past job experience is a poor indicator of future job performance. 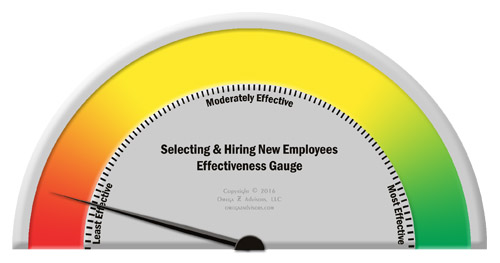 Many companies still just rely on interviews and reference checks in selecting and hiring new employees.

To upgrade, many use personality and emotional intelligence tests. These are still “significantly less effective” than many other approaches. Diving into the statistics we find them just a few small steps above a crap shoot (r-value < .25).

Using tests related to cognitive ability or integrity help much more. Combining practices and tests are even better. Directly observing people work over time remains the most effective predictor. Temp-to-hire is a way to do this. Assigning test projects or case studies to candidates is another way.

These conclusions come from Frank Schmidt’s life-long research of workplace productivity. Whitney Martin cites them in her Harvard Business Review article on problems with personality tests in hiring.

Why Personality and Emotional Intelligence Tests are Poor Indicators

These findings make sense too. Goleman and other emotional intelligence advocates are fond of saying, “High IQ will get you hired, but Emotional Intelligence (EI) will ensure you get promoted.”

A key reason why these ways persist is that most human resources (HR) professionals are not well versed on current findings. That puts non-HR professionals even more behind, making it hard for well-versed HR pros to sell new ways.

People are slow to adapt to new findings too. It took centuries before people were convinced the world was round and the earth revolved around the sun. Decades passed before doctors washed their hands as a routine surgical practice.

It is easier to identify the least effective way of selecting and hiring new employees than it is to move away from it. Those who do will avoid the costs of bad hires. They will also enjoy the fruits of good ones. For now, the field is open for them.