In an isolated system (one that is not taking in energy), entropy always increases over time.

In other words, if we don’t add energy, things degrade. Bad happens. Things don’t stay the same. They go downhill. It explains why firms go out of business even if all employees are doing their jobs.

Why Bad Happens So Naturally

Beyond thermodynamics though, this is a law of nature. It’s just the way things are. Consider this: the world around us is against each of us. We hear this more often as “the world is a harsh place.”

This shows up if I do nothing, absolutely nothing. I die. I don’t eat or drink, or I don’t shelter or clothe myself, I die. In short, I have to do stuff, apply energy, or my world ends. In this sense, we are creative energy forces.

As an example, take a car. If I don’t maintain it (put more into it), in time it will go bad. It won’t run. I can’t just keep getting in it, driving it and not abusing it, avoiding accidents. It’s the same with people, processes, products and performance. They degrade even if we don’t take energy away from them. 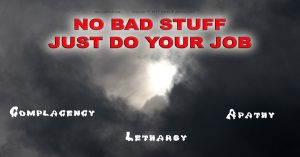 Employees doing nothing bad and doing just their jobs explain why bad stuff happens so naturally. It shows up as complacency, lethargy and apathy.

Why Bad Happens When Employees Just Do Their Jobs

In other words, the avoidance of doing bad stuff doesn’t mean good is being done. As one executive said to me when employees were asking for job descriptions, “Mike, my fear is that they will do only their jobs. I need them to do more than that.”

In the workplace, not doing bad stuff shows up as routines, compliance and adherence to standards and rules. Without new energy to refresh them, complacency, apathy, lethargy and the like show up. Said another way, if employees are just doing their jobs, things are going downhill.

Why Bad Happens Even If Everything Stays the Same

Consider their employees’ energy. Call it enthusiasm. Over time, what happens if people just come in and do their jobs, nothing more? Everything just stays the same? That enthusiasm dies.

No one did anything bad. They just didn’t do anything great. So, next time someone does something great and he replies after you compliment him, “I’m just doing my job.” Say, “You’re wrong. You didn’t do your job. That’s why it was great.”