Technology brings change. Human nature does not change. That means human nature exerts itself in the same way using new means. Knowing this history allows one to predict better how humans will use technology. As such, America’s taming of the Wild West becomes a road map for the future of the internet.

The Wild West As Road Map of Human Nature

Simply, there are explorers. They lay claim for governments. Settlers follow, then merchants. A little more government shows up to give protection. Larger commercial interests appear. More government follows. All the while, population grows.

With every passing day, the physical world becomes more and more integrated with the digital one. Early on, people saw the internet as another world, a fake one, a “virtual” one. Easterners saw the early west the same way, some disconnected, outer world. 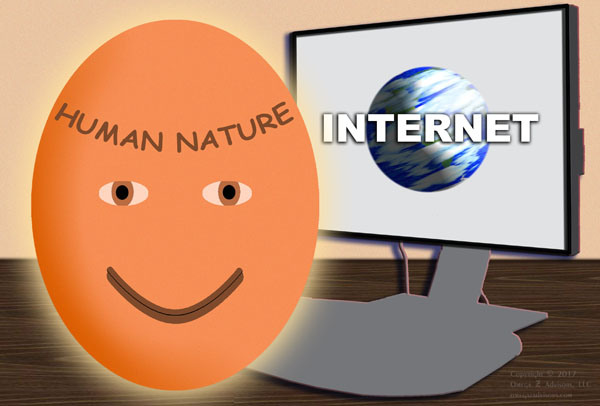 Seeing the future of the internet means knowing human nature.

Four Trends For The Future Of The Internet

Looking at the Wild West over almost two hundred years, four trends show up. These will shape the future of the internet too:

Concentration sees the expanding control of a few commercial interests over the internet. The Wild West saw its conglomerates in oil, transportation and communications. Today, Amazon, Google, Facebook, Apple, Microsoft, Comcast, Charter (Spectrum), AT&T and Verizon dominate. How many can use the internet without using two or three of these? Each dominates a piece.

Control brings borders and rules. As with the Wild West, states and firms will continue to seek control over the internet. Concerns over terrorism, violence and fake news will fuel state control. Dictatorships will seek to lock citizens in a certain mind set. Firms will keep pushing to lock customers in a certain product set.

Disclosure makes lives public. How easy can one hide in the Wild West today? It becomes harder on the internet every day too. It means the physical world too. The internet of things means all things. Simply, all things will become sensors. The trade of personal data for cheap internet use will thrive even more.

Homogeneity unifies social and cultural norms. They already exist today. The internet will intensify them. The Wild West now has access to McDonald’s and Walmart in all major towns. Choices of movies, music, shows and videos will concentrate. Options will still exist. Mega hits though will be the real cash cows. It’s human nature. People like what the most like.

To Know Future Of The Internet Know Human Nature

This won’t mean though human behavior won’t change. One should not interpret it though as human nature changing. Rather, the internet allows more dormant parts of human nature to express themselves.

It’s like a picture frame. Changing the frame can bring out colors, shapes and themes we didn’t see with the old frame. The internet is a frame, a framework for human nature.