The importance of probability in business decision making can’t be understated. Too many just don’t see its impact. Granted, statistics strike fear in most. Their minds shut down.

The Importance Of Probability In Business Decision Making As A Story

Still, the real importance of probability in business decision making doesn’t even deal with statistics, numbers or math. It’s its story. It’s about how to look at events.

For example, most would look at an outcome made by three events and think, “Doing those three things again would give the same outcome.” Probability’s story says, “Don’t count on it.”

Pilot programs are great business examples. When they go well, they usually launch a bigger program. When they don’t, they don’t. Probability says, “Not so fast.”

That is because probability’s story has two key themes that affect decision making:

For example, a salesperson follows a sales process. It does not always produce a sale. Sales can be of different sizes too. Yet, the process can come close to saying what the sales will be over time. 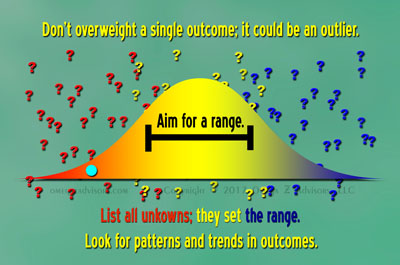 The importance of probability in business decision making processes shows up in four ways.

Listing unknowns can help with the range. The more there are, the broader the range needs to be. The fewer, the narrower. Beware though. People prefer to talk about what they know. Thus, people easily short the unknowns.

In the end, the importance of probability in business decision making goes beyond statistics, numbers, math and data. Its importance rests in its story. That story shows events in a context, a spectrum. They’re no longer lonely points linked by a thread. Only better decisions can result.