Sexual harassment destroys work organizational cultures. Certainly, the sexual harassment discussion topics on the news raise awareness. Yet, their focus on the crudest aspects of these incidents thwart a broader, more meaningful discussion.

As evidence, look at Jodie Foster’s take on The Late Show with Stephen Colbert. She says, “I’d love to hear complexity about [sexual harassment].”

I’ve conducted sexual harassment investigations. I’ve supported investigators in theirs. Finally, I’ve advised victims and even the accused. For the record, I’m not an attorney.

All this shallowness hit me when a peer, an author and speaker, posted a pledge on Facebook. It was for men to pledge not to use their power in workplace to pressure women to do anything in a way that most would consider sexual harassment.

Here’s how. First, companies can get into trouble if they don’t look into sexual harassment complaints. Second, they also can’t take retribution on anyone filing a complaint.

Moreover, there does not have to be legal proof of sexual harassment for the accused to lose his job. Many times there are no witnesses. Even the evidence can cut both ways. That means a “he said she said” situation. It then comes down to who’s the most credible.

Finally, one does not have to be direct victim of sexual harassment to file a complaint. She could be witness. The incident can convey a hostile workplace to a group. 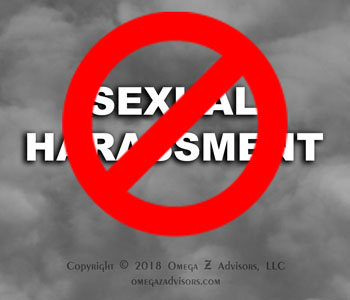 Many times the most salacious details cloud the main points of sexual harassment discussion topics on pop news.

Here then are case studies that blend some of what I ran across. They aren’t showing up as sexual harassment discussion topics on any news I know. None involve any groping, touching or exposing of sexual anatomy. Some would not fit a legal definition of sexual harassment. Still, someone filed a complaint. That triggers an investigation.

More important though, is this. These examples, based on a blend of actual stories, show how even incidents that aren’t sexual harassment in a legal sense can create a hostile workplace. That’s why if someone sees a joke, tease, flirt, innuendo or comment as hostile and asks you to stop. You should.

A female sales rep brings her boss and his boss to nail down a large account. The two bosses notice that the client took a keen interest in the sales rep. After the call, they joke with the rep about going “the extra mile” to get the account. Soon, the jokes don’t seem like jokes. She tells them she is uncomfortable with the discussion. Dead silence ensues. Three weeks later they let her go.

An all-male, all-white production team of about twelve constantly harass one of the team members. Some insults are sexual. At one point, someone draws a picture of him having sex with an animal and posts it in the shop. He complains to the human resources manager. The HR manager says, “A man can’t complain about sexual harassment.” (He can.) The company lets the worker go a year later at the recommendation of the team leader.

Four women work a small municipal office. Men who work in the field have cause to frequent the office. A few compliment one woman on her anatomy by saying such things as “nice ass.” The victim takes it as a compliment. Her co-workers don’t. They tire of this and complain to their supervisor. They become upset the victim does not join the complaint. Tension rises. Within the year, the victim finds another job. She’s had enough of them.

A male executive routinely asks a female independent contractor to work with him on projects late and on weekends. He even invites her to conferences and his home. Hoping to seek permanent employment with the firm, she agrees. She endures relentless invites and flirtatious emails. At times, she responds in kind, feeling the need to gain his favor. He says he is working to get her on board. After a few months, her husband files an anonymous complaint with the executive’s employer. The firm investigates. It ends his employment. He files a wrongful termination suit.

A woman with over four documented cases of suicide attempts in seven years complains about sexual harassment from a male employee. She claims his excessive attention to her is making her feel uncomfortable. He’s has been partially paralyzed since birth. This shows up as sweeping gestures and awkward speech. While the firm does not find any sexual harassment, a written warning goes in his file. They separate employees. So distraught over his integrity being tainted for trying to help her make up lost time from work, he leaves for another job.