Influencing the subconscious mind used to live on the fringes. Only since around 2005 did it move to a serious realm of study. For instance, emotional intelligence, an 80’s creation, does not address it. 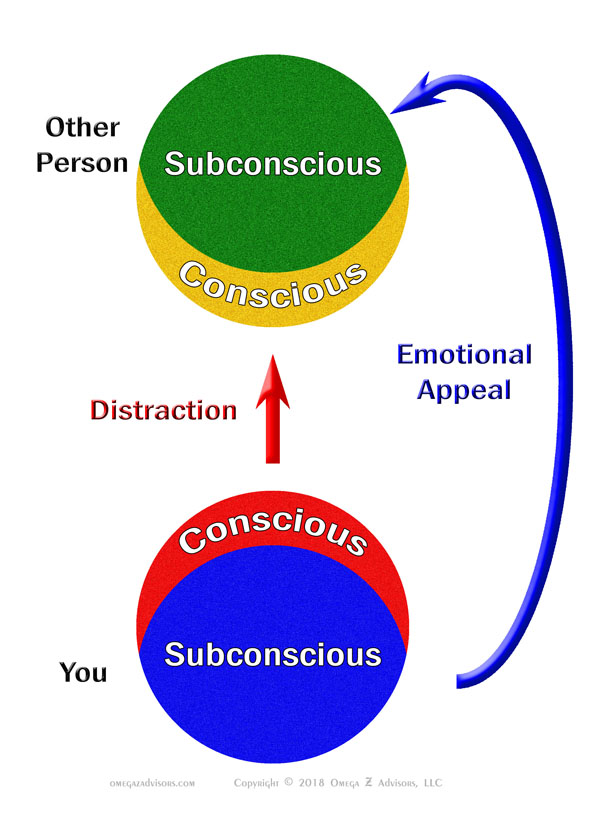 Influencing the subconscious mind in others has two basic aspects: a conscious distraction and an emotional appeal.

How The Subconscious Works

In order to influence the subconscious, it helps to know how it works. In simple terms, something triggers an emotion. The conscious mind though does not detect this. At that time, or later, the emotion surfaces. This forces the conscious to form a thought. However, it does not know what triggered it. It might come up with an idea. It’s almost always wrong.

Take a wobbly table. It triggers emotions of instability subconsciously in those who sit at it. These surface though on a conscious level as a need to seek stability. So, if the topic at hand were investing, the person would make more conservative decisions than normally.

This same case study, the wobbly table, shows the first two steps to using this influencing. The first is that people can’t be aware of it. At minimum they need to discount it. Thus, the first step is distracting the conscious mind.

Many times this is easy. Very few would think that a table could affect their decisions this way. On the other hand, take relationship building tips. They influence subconsciously too. People though are more aware of these and how they impact decisions. “She was so nice. I just had to buy something.”

The second step almost always involves the trigger of emotions. This can be an object, such as the table. It can be an idea, an event or a situation. Words and pictures do it too. Saying, “It’s a rule,” will cause people to question it less.

So, take the relational tips. Since people know their influence, it’s about getting them to forget them. That means distraction. It’s done by getting them to focus on the topic at hand. Their focus won’t be on what you’re doing. The conscious mind can focus only so much.

This influence exists all around us. Stories and ambiance affect the taste of food. Placebos are other common ones. High pressure sales tactics are another. Still, the reason why they work is that people don’t believe they work on them.