The major source of conflict in the workplace is personality. The workplace stresses people. It strains relationships. The more two personalities differ the more conflict will erupt. 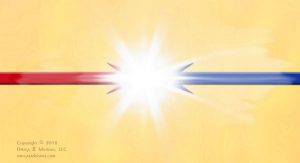 Personality differences are the major source of conflict in the workplace between employees.

Overlooking Personality As Source Of Conflict

In the workplace though, the tendency is to look at personalities last. The focus is on impersonal factors such as objectives, compensation and communication. Conflict over such factors is a symptom of something deeper. That is personality differences.

For instance, it’s common for people in conflict to say another person is out to get them or making their life miserable. In truth, making someone’s life miserable takes a lot of work. What’s more common is for one person to see something that another does not. Yet, it’s quite common for the first to think the second should.

Danger In Treating Everyone The Same

Unfortunately, a Golden Rule of the Bible encourages this problem. “Do unto others as you would have others do onto you.” While good in extreme situations, it’s poor in more daily ones.

That’s because the basic assumption is that people are the same. If I like a behavior, another should too. Therefore, if he does something I do not like, then he must have no concern for my success.

This plants the seed of resentment. In mental health, this danger is harder to overcome than alcohol or drug addiction. This produces emotional sunburn. As with a physical one, any slight rub hurts much more. In other words, impersonal factors that might just roll off no longer do.

Reducing This Source Of Conflict In The Workplace

To reduce this threat two strategies make a good first step. First, managers need to train employees on the vast differences in personalities. Almost any personality test can help here. Even talking about what to look for in a good car can.

The second strategy involves managers using personality as a rationale. For instance, rather than giving an excuse why someone did something that irritated another, just say, “That’s just the way she is. She’s not aware of such things.”

Personal likes and dislikes are windows to personality. It’s easy to discount them. They seem so trivial.  They’re not. The more teams accept that personality differences can show up in daily work, the more they ward off potential conflicts.