An Experiment To Try With Employees

Try this. Give an employee a task. It works best with something new. Define the outcome but don’t tell him how to do it. Don’t give him any process, procedures or rules. Do this with a few employees.

Treat it like that British baking show. They tell the bakers what to make. They don’t give them any recipes though. The bakers receive no advice. See what happens.

Being Told What To Do Varies By Personality

In truth, some employees would love this. Others would freeze. The rest would work through it stressed. That’s because how one responds to structure varies. Some need a lot. Some don’t.

Now, psychologists tell us people don’t like to be told what to do. True, except work differs. It has a higher price for failing. Security carries more weight. This puts more stress on employees. That causes these differences in personality to show more. 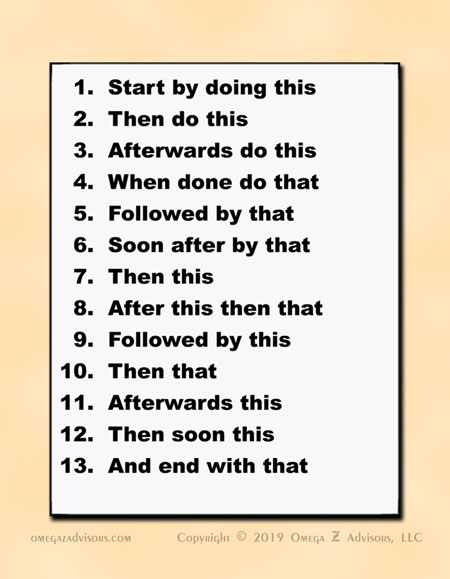 Engagement surveys understate how much employees like being told what to do because they focus on what employees say and not how they behave.

Being Told What To Do Gives Cover

In short, many employees don’t want to think. They prefer being told what to do. This number grows as the risk and potential penalties rise. Thinking is work. It’s stressful. It slows things down.

That’s why many would prefer a “recipe” over figuring it out on their own. It reduces failure and risk. Again, more of the risk passes to those giving and writing the recipe.

Being Told What To Do Gives Employees Freedom

Finally, personal reasons exist for these employees too. They just want to keep their jobs. Jumping to the next rung is not what they want. Their rewards come from outside work. It’s their families, friends, networks and communities. Their jobs give them freedom to pursue these rewards.

Therefore, it’s time to give up on one-color management. Its newness and popularity are just another color. Yet, it remains one color. This time the color is “empowerment.”

Still, it dehumanizes. As with earlier colors, it paints all employees the same color. People are different colors. Employees are people.