The failure of constructive criticism lies in excellence. It can deliver okay performances. It does not deliver excellent ones though. Research and science showing this mount.

The Worst Failure Of Constructive Criticism

As the digital age takes on more tasks, it’s taking the easy ones to define. They’re the easiest to code. It’s leaving the hard ones. Increasingly then, constructive criticism, as a coaching tool, is going the way of the rotary phone. 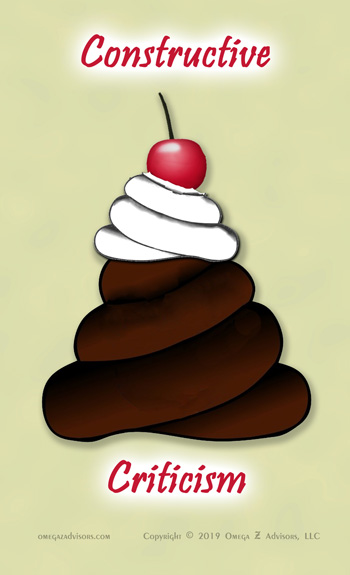 Constructive criticism is just poop with whip cream and a cherry on top. That’s why it fails to deliver excellence.

Why Constructive Criticism Fails To Excel

Constructive criticism fails to excel for two reasons. First, humans are not good judges of other humans. Second, humans do better by focusing on what they do well than on what they don’t.

Unless objective standards exist, people have too many biases to judge others. Therefore, when it comes to attributes such as leading, speaking, organizing, writing and other classic soft skills, the criticism says more about the giver of it than the receiver.

For example, if a manager has some doubt about his organization skills, he will likely reflect that doubt by criticizing his employees for it. Often, this occurs without the manager realizing it (the  idiosyncratic rater effect).

Learning Is About A Full Glass Not An Empty One

Learning isn’t about filling up what is empty. It’s about “recognizing, reinforcing and refining” what’s already full. That means seeing good attributes, keeping them, and bettering them.

Constructive Criticism Brings Out The Worst In All

For managers, this shows up as needing to feel or show toughness. It’s often rationalized as “tough love” or “this isn’t personal, it’s business.” It’s holding the power to judge others.

For employees, seeds of doubt sprout. An authoritative word can easily trump what an employee sees, even causing false confessions. That undermines excellence, leaving the ordinary.

Again, the digital age automates the easy-to-define tasks. The vaguer ones remain. That means as that age advances the failure of constructive criticism will grow.