Employees who play the victim sometimes play that to get what they want. Thus, it’s a mistake to see such employees as weak. Playing the victim exerts its greatest power when it hits the hero mindset of the boss.

That’s because hero stories exist in all people. All cultures have them. It’s one reason why superhero movies are popular. The name for such powerful stories is archetype.

Examples Of Employees Who Play The Victim Purposefully

For instance, a manager comes to you as the human resources manager to complain about one of her employees. It’s just one of several she has made about him. Yet, when you ask whether we should fire the employee, she says, “No, that would be too harsh. He has a family to support.”

As a less extreme example, a sales rep complains about the commissions he receives a certain types of projects. Seeing his point, as the sales manager, you discuss it with finance.

The manager then decides to call the sales rep. He asks, “Is this really such a big deal for you?” The sales rep replies, “No, it’s more of an issue for my boss.”

In both examples, the manager in the first and employee in the second use their bosses to fight their battles. They don’t want to dirty their hands. 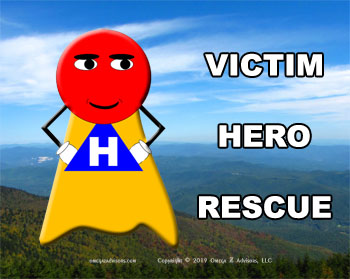 Playing the victim triggers the boss’ need to be the hero.

Tapping The Hero Mindset In Bosses

The urge to play hero is strong. In men it’s even a hormonal response. It spikes testosterone levels. Still, in both men and women, the thought and emotion of being a hero in employees’ eyes is powerful. It’s especially strong in bosses insecure in their positions.

Employees who play the victim can tap the hero mindset by triggering the boss’ ego too. That was the first example above. Done in this way, the boss plays the hero by protecting her ego, a pet project, the team, the company and more. It all depends on how the “victim” plays the cards.

The most potent combo though is a female employee playing the victim to a male boss. This is the “damsel in distress,” another subset of hero dynamics. It further heightens testosterone levels. Females who bully other females often play the “victim” with their male bosses to get actions against rivals.

In the end, employees who play the victim have many ways to play. In the end though, it’s about getting someone else to the dirty work. So, the question to ask oneself, “Is this employee asking me to do something that he could (or should) do?”