People underestimate the power of a few. They like to think majority rules. That might work in voting. It does not work in reality though. Nothing shows this more than the power of a few jerks in the workplace to ruin it for all. 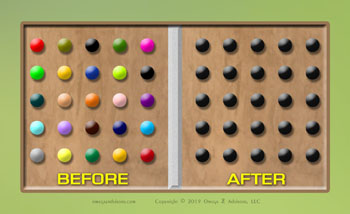 It’s far easier to turn people into jerks than to turn them into a team. Just a few will do it.

Jerks In The Workplace Infecting Others

Yes, most know that “one bad apple ruins the lot.” They often think of this as onerous rules coming about to make life a pain for all. Yet, there’s more to this. Jerks can infect a whole group, turning us into jerks too.

For instance, The Atlantic describes one experiment made as a game:

In another case, it only took a small, passionate few to convert the views of a whole group. In this the few mounted to less than 10%. Jerks are very passionate. Just ask them about themselves.

True they aren’t a unified group. Yet, their selfishness, sense of entitlement and insensitivity to others unite their behaviors.

The jerks’ actions trigger resentment in others. It’s “a feeling of indignation.” According to mental health experts I’ve interviewed, it’s the toughest emotion to overcome. It’s even harder to overcome than a drug addiction.

As a result, people stop following accepted norms of behavior. If the jerks get away with it, why shouldn’t they too?

Now, it’s quite simple to say, “Well, all we have to do is clamp down on the jerks.” Yet, this is not easy. Some jerks are star performers. Perhaps it’s some of those jerky traits that make them so. What do we do then?

Reining In The Jerks In The Workplace

It’s exactly the success of jerks that makes it easy to ignore the problems they create. Moreover, the difficulty in measuring their adverse effect makes it difficult to coach and to address in such matters as raises and promotions.

However, this post’s point is to show that ignoring jerks – no matter how successful – has costs. They’re more than just enduring coworkers’ complaints. The costs allow jerks to ruin the workplace for all. Others start to behave like jerks. In time, the culture becomes jerky. That hurts cooperation, collaboration, teamwork and business.

There’s no overarching solution to jerks. After all, they’re people too. The solutions are individualized ones. At some point, someone needs to explain to jerks the costs of their behaviors. Reading this post and its supporting research is a good start.