Taking pictures rely upon objects reflecting light, any light. A black hole swallows light. So, how does one get a picture if it reflects no light? By attacking and answering this question, the team also gave us tips for successful innovation teams.

The black hole team had 200 members. They weren’t just there for brain power to figure out how to take a picture of a black hole. Logistical obstacles existed.

For instance, to take a pic they would need a telescope the size of Earth to do it. Instead, they used eight telescopes taking the same pic at the same time when all had cloudless days.

Since they could not get a real picture of a black hole, they inverted the problem. They took pics of the effect the black hole had on its surroundings. It was like capturing its shadow. This yielded immense data and tips for successful innovation teams. 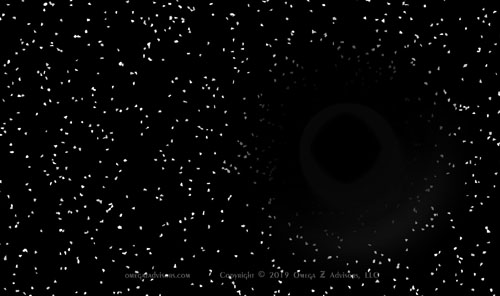 Tackling the impossible challenge of getting an image of a black hole yielded important tips for innovation teams.

Attack The Danger Of Seeing What You Want To See

To attack this data, the team wrote algorithms to run through it all and come up with a single image. Yet, it’s easy for algorithms to reflect the biases (more) of the makers. For instance, the main theory said black holes were a series of rings.

So, how would the team know they did not unconsciously code algorithms to see what they want? First, they divided into four teams. Each wrote their own. Then they tested them. They ran data through them of “shadows” of images that didn’t have rings. In short, they self-tested.

The biggest danger to any team is groupthink. Collaboration and consensus often reinforce this. By nature, people conform to the group. That’s part of what makes them social creatures.

In the case of the black hole team, this meant breaking down authority, promoting collaborations across specialties and embracing intense debate. Thus, rather than forcing a consensus define the decision makers. Allow dissenters to remain untainted by the group. They will do better than when forced to concede.

People love to tell their views and they love to hear others support them. This hits the same reward centers as money, food and sex. Yes, it sounds great. It’s just not one of the tips for successful innovation teams.