Breaking down a problem is a common problem-solving technique. Making teams more efficient has a similar solution. It involves setting interim goals.

The Natural Inefficiency Of Teams

Groups are often inefficient. Their many touch points of communication and interaction make them so. It’s frequent for teams to do almost no work on a project until halfway to the deadline.

At this point, one of two things happens. One, the team kicks into high gear. Or two, it shuts down. The goal now seems too unrealistic. Both are not good. Rushing lowers quality. Not getting it done might be better. At least, work was not wasted on a wasted effort. 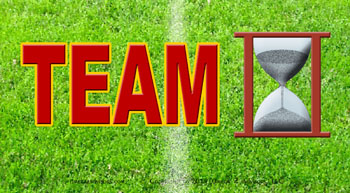 Most teams do almost no work on a project until halfway to the deadline.

To avoid this, interim goals help. At first, the obviousness of this makes it sound easy. Here’s a warning. It’s not.

For instance, goals might need personalizing to specific members. Otherwise, the team becomes a team of smaller teams. These smaller teams will have the same efficiency challenges as the large ones.

It’s also not as simple as saying, “Have 25% by ‘Time X’, have 50% done by ‘Time Y’.” This can work, but tasks and specific accomplishments work better. They aren’t as subjective. They also spur motivation better. Saying something’s done makes people feel better than saying it’s halfway there.

Too often the decision maker is assumed. This only increases the chance for miscommunication and conflict. “Why is she following up?” “Who made him boss?” This slows things down. It wastes time. State the decision maker. Stating the obvious ensures it’s obvious.

Goals motivate people. Yet, most don’t get going until the hourglass is half empty. Interim goals focused on specific objectives and tasks help. Still, too many things can pop up. Uncertainty always hides. Making teams more efficient with interim goals means clearly stating decision makers too. It reduces time wasted on smoothing out preventable misunderstandings.