When we see people asserting dominance, it can indicate lying. After all, people use their dominance to influence us, and lies exist to influence. Both team up when the truth and arguments aren’t working.

How Dominance Appears In Wording

Yet, it’s easy to see dominance in forms such as posture, gesture and tone. It’s much harder in wording. If we’re somewhat alert, we might see it as controlling and directing the discussion. It’s more specific than that though.

For instance, a past post shared five unconscious tells of lying involving word choice and expressions. Another shared nine conditions under which people are more likely to cheat. If we know such a condition exists and we hear such expressions, then the likelihood of a lie rises. If the person is also asserting dominance, then the case grows even further. 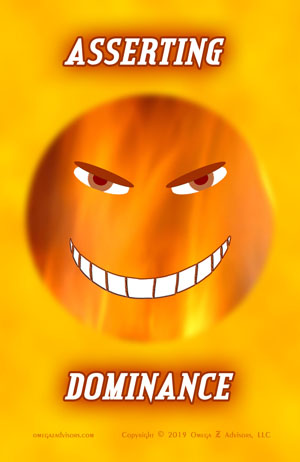 Asserting dominance is a powerful way to set oneself up as an authority in another’s mind, thus making the promoting of a lie easier.

The most common and acceptable way we experience people asserting dominance through wording is when they set the limits of discussion. “We won’t go there,” “That’s better left for another day,” and “That’s too much for now,” are some examples.

They also assert their dominance through wording by:

Why Asserting Dominance Can Indicate Lying

We believe authorities and experts more than we believe other people. Thus, asserting dominance is a very powerful way to set oneself up as an authority in another’s mind. Promoting a lie becomes easier.

Our belief in authorities is so powerful that people even confess to crimes they did not commit. People believe they are tired even if they slept well. They believe leaders they like over facts that say they’re wrong.

In the end then, wording helps us see when a person is working to assert her dominance. When she works more on this than on the facts or points, it’s a good sign of hiding something. Yes, it could just be a weak position. It could also be a lie.