These days narratives are all the craze. They’re powerful. They bring groups together, binding them.

While the internet is the door to vast info, that door floods people with lies. These form tempting narratives. They feed people’s lust for the world they want, no matter how unreal it might be. 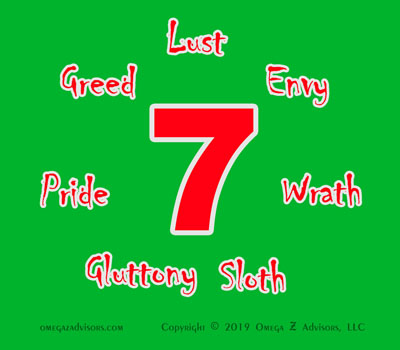 The seven deadly sins go a long way in explaining why people prefer lies to truth on the internet.

On the internet, it’s easy to see what others have. This arouses envy. Those tempting narratives say those gains were ill-gotten. They were meant for those who were here first. Any news saying otherwise is fake. This envy justifies people’s wrath for those others.

Finding the truth and uncovering lies are hard work. The sloth prevents people from doing that work. It’s just so much easier and fun to digest what one wants to hear. Gluttony has people wanting more and more of the same lies. They taste so great and are so easy to get. Best yet, they need much less thought than the disagreeable stuff.

As people consume more lies, they feel they know more. Pride says they’re the ones in the know. The others aren’t. They’re clowns. As people share their pride, likes, reposts and retweets grow. These trigger the brain’s reward centers. Greed wants more of this drug. So, people run with more and more lies.

In the end, the seven deadly sins work as a team. They make people prefer lies to truth. They make people want to run and spread them. It’s not the internet doing this. It’s people doing it to themselves. It all begins with lusting for likeable narratives.

Yes, the internet has proven that people prefer lies to truth. It has also proven the seven deadly sins are alive and well in people too.